Reducing the budget deficit is a challenge for Cuba

Reducing the budget deficit is a challenge for Cuba 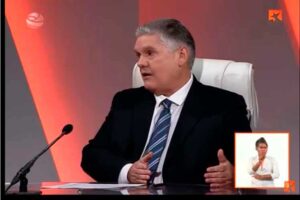 Havana, Cuba.- Cuba today has a larger budget deficit than desired and reducing it without applying shock policies is the challenge, according to Deputy Prime Minister and head of Economy and Planning, Alejandro Gil.

Speaking on the TV program Mesa Redonda the day before, the minister recalled that the Island experienced a 13 percent drop in its gross domestic product between 2019 and 2020, as well as the loss of more than three billion dollars, but despite that it did not give up social spending.

That performance contributed to the increase of the deficit, but that is the nature of the socialist system, meant Gil, who referred that despite the difficulties they did not close schools and hospitals, while they protected the most vulnerable and workers who were temporarily unemployed due to Covid-19.

Cuba is a different country, with inclusive policies, which must always think of solutions for more than 11 million Cubans, not for a minority, he emphasized.

The deputy prime minister said that this year there are conditions to continue with the gradual recovery of the national economy, which is closely linked to the maintenance of control over Covid-19, without false expectations.

Among the positive factors in this 2022, Gil refered to the stability of the electro-energy system, the increase in the number of international visitors, with 86 thousand in January, and the increase in agricultural productions.

To this must be added the incorporation of new economic actors, with almost two thousand micro, small and medium-sized enterprises; the measures to strengthen state entities, and the creation in 2021 of 200 thousand jobs, despite the economic restrictions and the intensification of the U.S. blockade.

Regarding the latter, he remarked that it is the main obstacle to the development of the country, but in spite of this we are obliged to look for ways to survive and move forward.

Etiquetas: Reducing the budget deficit is a challenge for Cuba