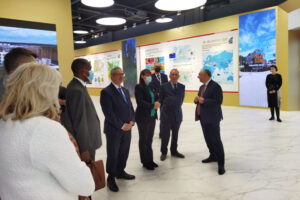 Minsk, Belarus.- The head of the Administration of the China-Belarus Great Stone Industrial Park, Aleksandr Yaroshenko, and his Cuban counterpart from the Mariel Special Development Zone (ZEDM), Ana Teresa Igarza, discussed the strengthening of bilateral cooperation on Wednesday.

During the tour of the park, the Cuban and Belorussian delegations talked about their experiences and the promotion of investment, Cuban diplomatic sources reported.

Cuban Ambassador in Minsk Juan Valdes said that previous virtual meetings were fruitful, mainly the video conference in which the parties signed a memorandum of collaboration remotely.

He added that relations will be further strengthened with the visit of executives from the Great Stone Industrial Park to Cuba and the progress of negotiations on possible new joint projects between both economic zones, which will contribute to the development of both countries.

On Wednesday, the Cuban delegation honored the Defender of the Fatherland Day by laying a wreath at the Victory Square, together with President of the Friendship with Cuba Parliamentary Group, Sergey Klishevich.

During her stay in here, Igarza and the Cuban delegation were received by the deputy chairman of the House of Representatives at the National Assembly of Belarus, Valery Mitskevich.

As part of the agenda, Igarza is visiting important industrial and production centers, including companies that produce electrical buses, MAZ trucks and Belarus tractors, in order to boost bilateral relations through investment in Cuba.