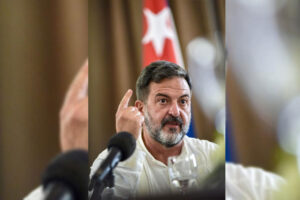 Through his official Twitter account, the president gave “the warmest welcome” to the parliamentarian and described him as a “friend and defender of the Cuban Revolution”.

The day before Pineda, who is on a working visit to Cuba, held a meeting with the president of the National Assembly of People’s Power, Esteban Lazo.

The member of the Communist Party of Spain said that he is against any kind of interference in the Cuban internal affairs and ratify his solidarity with the country.

The MEP also spoke with representatives of Cuban youth organizations, where he denounced the subversion plans against Cuba, the distortion of reality and the use of fake news and images after the riots of July 11.