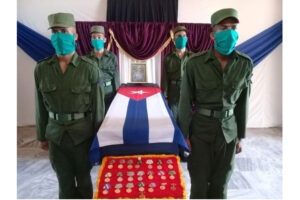 Juan Quintin Paz Camacho was the youngest of 12 militia fighters who, after the triumph of the Revolution (1959), fought against a band of assassins funded by the CIA whot operated in the Pinar del Rio (west) mountain range.

After succeeding in this objective, he joined the fight against bandits until 1965.

Paz died in Pinar del Rio on Saturday at the age of 83, due to Covid-19 after-effects.

Floral wreaths from Army General Raul Castro and President Diaz-Canel escorted the remains of the peasant fighter during the funeral services.