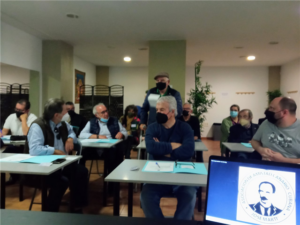 According to a press release, the group, founded in 1977 by Francisco “Paco” Gonzalez-Casanova, along with other people, held its general assembly in Santa Cruz de Tenerife, where renewed examples of support for the Cuban Revolution were expressed.

Its associates decided to grant a Honorary Membership award to Maria “Jovita” Vargas Paz “for dedicating her life to the friendship and solidarity with Cuba and her immense contribution to the Association’s work,” and Rafael Medina Ortega “for his internationalist commitment and his noble solidarity work in support of Cuba and its people.”

After a period of relative inactivity due to the Covid-19 pandemic, the meeting marked a turning point in the resumption of the Association’s work, with the approval of an Action Plan for 2022, making emphasis on “its commitment to the permanent denunciation of the criminal blockade that the United States has imposed on Cuba for 60 years.”

The active participation of the Canary Islands Association in the campaign of the State Movement of Solidarity with Cuba “Tons of Solidarity against the Blockade against Cuba,” to collect medical-health materials and donations for their purchase and shipment from January to July 26, 2022, was highlighted during the meeting.