“This year’s presidential elections in Venezuela are particularly important, as they mark a cycle characterized by constant sabotage of democracy in the country,” Ali Rodriguez, Venezuelan Ambassador in Cuba said. 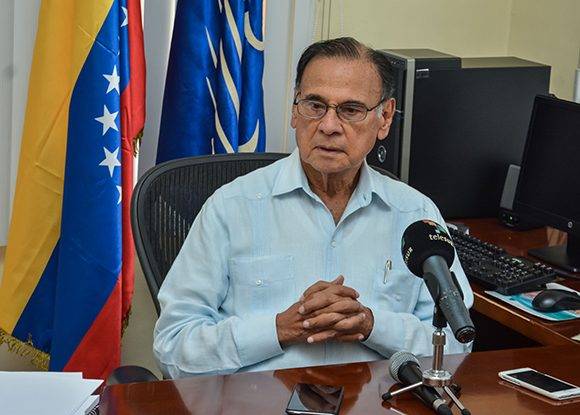 HAVANA, Cuba. – “This year’s presidential elections in Venezuela are particularly important, as they mark a cycle characterized by constant sabotage of democracy in the country,” Ali Rodriguez, Venezuelan Ambassador in Cuba said.

“This cycle had a stormy start, mainly last year with all the attempts to overthrow President Nicolas Maduro by violence, but they failed raucously,” the diplomat said,

Rodriguez said that elections, fixed for next April 22, will pass in an atmosphere of peace, which sealed a new period of consolidation of democracy in Venezuela.

“The coalition of opposition parties shows little cohesion becausethey know for certain they are going to lose, still united, what would be ideal for us,” the official added.

Peace Must Prevail in the Elections

Venezuelan Ambassador in Cuba Ali Rodriguez argued that, if it did not participate in the elections, the opposition Bureau of Democratic Unity would practically extinguish its existence on the political stage of the South American nation.

“Peace must prevail during the elections,” Rodriguez said, “although we have now an explicit threat from the US Government, which has announced it will intervene militarily in Venezuela if necessary.”

“They are trying to find a justification, and to do so they try to create a humanitarian situation in the country that justifies their actions,” the politician remarked.

“In Venezuela they ought to think twice, because the cost Washington would have to pay would be quite high if they do it directly, and if they do indirectly, those who volunteer will suffer the same fate,” Ali Rodriguez concluded.
.