In Cuba, New Measures in the Face of Covid-19 Pandemic

Minister of Transportation Eduardo Rodriguez announced at the Round Table TV program new measures as part of the confrontation with Covid-19, which include, from next Saturday, the total paralysis of urban and inter-municipal public transport service, including the private one. 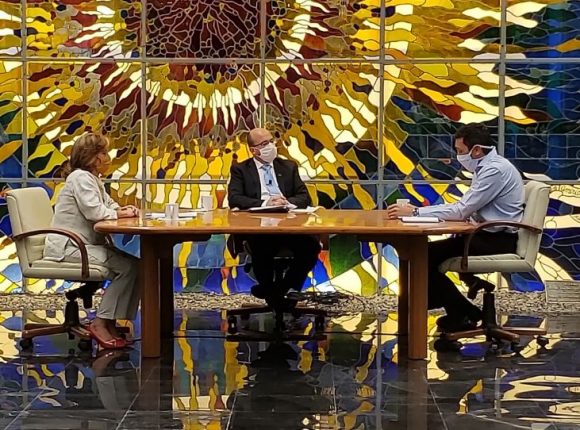 HAVANA, Cuba.- Minister of Transportation Eduardo Rodriguez announced at the Round Table TV program new measures as part of the confrontation with Covid-19, which include, from next Saturday, the total paralysis of urban and inter-municipal public transport service, including the private one.

This is due to the need for social isolation, because despite the indications given by the country’s top direction to stay at home and going out only when it I s really necessary, an increase in the mobility of people was appreciated in recent days.

Eduardo Rodríguez added in the Round Table TV program that there will also be a significant reduction in public transportation this Friday, to avoid the presence of citizens on the streets.

The official emphasized that transportation would only be maintained in priority services activities, and monitoring measures would be drawn up for implementation.

Food Transportation Will Be Ensured

The authorized means of transportation will carry half of the passengers, and other regulatory measures will be applied to him, the Minister of the sector, Eduardo Rodriguez, reported on Thursday at the Round Table.

The Minister ratified the mandatory use of nasobuco to travel in any type of vehicle, and hands should be disinfected with sodium hypochlorite before boarding.

Eduardo Rodriguez said it is also forbidden to transport passengers in means of transport of cargo. The transport operating license for the self-employed is suspended, and once the situation is resolved, it will be restored.

All means required will be put into the task of food transport, the Minister of Transportation said, adding that state inspectors will have the mission to ensure compliance with the new measures.

Ensuring the Vitality of Trade

The Minister of Domestic Trade, Betsy Diaz, indicated in the Roundtable TV program that measures are still being implemented to increase social estrangement in the face of Covid-19, such as starting two days earlier the delivery of products of the basic basket.

The sale of toiletries also continued, and 84 municipalities have received washing and toilet soap, Diaz said. She added that detergent and toothpaste will be expanded according to their availability, as they are products with limitations for their acquisition.

The Minister highlighted that the sale of sodium hypochlorite has increased, although the population in several parts of the country is asking for more outlets for the product, and work is being done to respond to that claim.

“We reiterate that all service within the gastronomic units is suspended, which will continue to operate until 8 p.m. only,” the official said at the Round Table.

Domestic Trade Minister Betsy Diaz announced new decisions for the reordering of the sector, with a view to increasing efficiency in the fight against Covid-19 in Cuba.

The Minister pointed out that new commercial units for the sale of food, toilet and hygiene products will be reconditioned in the chain stores, taking care of the need for the permanence of the population in their places of residence, and avoiding transfers

Other measures will be the halting of the marketing of non-basic products, and the manufacture of toilet and food modules to speed up sales, and prevent the stay of people in the shops.

Betsy Diaz pointed out that mobile sales of these modules would be organized in several communities and in the workplaces that remain working because of their importance. She added that from this Friday, sales in large shopping centers were eliminated.

Alternatives Thinking about the People

Minister of Domestic Trade Betsy Diaz highlighted that given the current situation of the country, due to Covid-19, this sector is one of the activities that it is essential to maintain.

In announcing at the Roundtable TV program the new measures for the reordering of the sector in the confrontation of the disease, the Minister highlighted the opening of seven new virtual stores in the Cuban capital and its subsequent expansion in the rest of the island.

Diaz referred to the multiple advantages of this option in times of social isolation, noting that from April 17 to 30 the banking system will offer a special bonus to users opting for the alternative.

The Minister of Domestic Trade confirmed that the schedule of the services of gastronomy, state and on self-employment, is limited until 8 pm, and the sale of alcoholic beverages in those premises is abolished.

Before Covid-19, a Coherent and Comprehensive Response

“Covid-19 pandemic has been an unprecedented challenge for Cuban science. Since it is a new disease, we work against the clock and that is a challenge,” Ileana Morales, Director of Science and Technological Innovation of the Ministry of Public Health said.

Speaking at the Round Table, Morales highlighted that the country prepared an early, coherent response with unity and integrality, since from the end of January a comprehensive science group was formed, which researched evidence for diagnosis, treatment and measures, to which a second team composed of renowned experts was added.

The expert emphasized that science carries out a hard work, with the mission of finding the most effective measures, and supporting decision-making in the Covid-19 confrontation.

This is an arsenal of studies and clinical trials, projects and research, Morales said.

The Vice-President of the Cuban Society of Hygiene and Epidemiology, Dr. Pedro Mas Bermejo, explained this Thursday in the Roundtable TV program the methodology adopted in Cuba to deal with Covid-19.

Dr. Mas specified that the creation of working groups to deal, from the different areas of knowledge, with this type of epidemic, is not a new experience, since Cuba had previously implemented it in the case of dengue.

The specialist said that the joint action of different institutions allows to make decisions quickly and more accurately in each of the stages the country passes through.

Dr. Mas asserted that the most effective vaccine so far against Covid-19 is strict compliance with the measures announced by our government, the result of national and foreign scientific consensus.

Mathematics According to Human Health

When appearing at the Roundtable TV program, the Dean of the Faculty of Mathematics and Computing of the University of Havana, Raul Guinovart, explained the fundamental role of mathematical analysis in the action plan for the fight against Covid-19 in Cuba.

“Today many investigators have met to help the country’s authorities to take the necessary measures in advance, and thus defeat the pandemic,” he highlighted.

Guinovart indicated that mathematical studies are used with historical models on other epidemics, which have been nurtured by new technologies, and manage to guide the behavior of different processes associated with the spread of the virus.

The Dean of the Faculty of Mathematics and Computing of the University of Havana said in the Roundtable that the mathematical models used for the Covid-19 confrontation, refer how the number of sick people increases, and in what approximate time that process occurs.

The Dean of the Faculty of Mathematics and Computing of the University of Havana, Raul Guinovart, explained that to make precise mathematical models that lead to decreasing the contagion of Covid-19, the population is divided into groups, including healthy, sick, recovered and deceased.

He said that the growth in the number of patients depends on the interaction of the healthy and sick, i.e. social estrangement is the key to reducing contagion.

Guinovart further explained that models of mathematical equations which are used result in different predictions that are contrasted with international data, to increase their accuracy.

In no country in the world the epidemic has been controlled quickly, the expert said, adding that the model allows to estimate the prognosis of the peak of the disease in the first fortnight of May, a scenario that can be modified by correct social behavior.

Connected to the Present

The first Vice-Rector of the University of Computer Sciences, Raydel Montesino, commented in the Roundtable TV program on the action of the university community in the battle against Covid-19.

Among the most significant examples is the creation and implementation of various IT solutions aimed at facilitating the work of specialists, and disseminating information needed for the population.

Montesino highlighted the Covid-19 Monitor, a system created by the Cuban university itself, and the sending of messages of dissemination from the Ministry of Public Health to users registered in the Todus application.

Other innovations will make it easier for the population to stay in their homes, as in the case of the Virtual Requester, which will be accessible from the national network.