Diaz-Canel: Task Number One Has To Be the Future

For the Council of State, its President, Vice-President and the remaining 19 members; for the Vice President of the Republic and its President, the number one task has to be the future, Miguel Diaz-Canel said at the extraordinary session of the National Assembly attended by Army General Raul Castro. 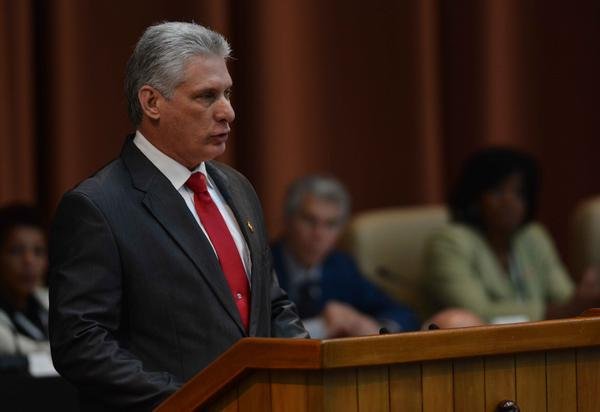 Diaz-Canel before the National Assembly of Popular Power.

HAVANA, Cuba.- For the Council of State, its President, Vice-President and the remaining 19 members; for the Vice President of the Republic and its President, the number one task has to be the future, Miguel Diaz-Canel said at the extraordinary session of the National Assembly attended by Army General Raul Castro.

In his inauguration speech as President of the Republic, with Salvador Valdes Mesa as Vice President, Diaz-Canel recalled that October 10 is Cuba’s first day of freedom and independence.

The speaker stated this day has to be celebrated for its strong resonances until this minute when, he said, we have renewed the oath to serve the Fatherland.

Diaz-Canel highlighted the episodes that place youth at the epicenter of struggle and recalled that in July ’62, Fidel Castro said at the University of Oriente that the Revolution is a struggle for the future.

President Miguel Diaz-Canel stated the newly elected have put defense and economy in the first place, simultaneously, because they do not forget that a Revolution is worth what it knows how to defend itself and economy is the great determinant of the future.

The head of State recalled that in recent days since the Presidency, thinking as a country was called upon, and in the more than one thousand 200 answers they found great optimism and confidence in the future, but also expressions of concern.

A logical and revolutionary concern we share in the face of a world dominated by imbalance in economic relations, without buffers for lower-development nations and where it has become practical that global financial institutions bail out banks but never peoples, Diaz-Canel emphasized.

The Cuban President recalled that  Jose Marti taught that governing is the art of foreseeing and the Cuban Revolution owes much to the foresighted genius of Fidel and Raul.

Resisting without Giving Up Development

At the extraordinary session of the National Assembly, the newly elected President of the Republic, Miguel Diaz-Canel, stated that this year, particularly in recent months, have tested the Cuban ability to resist, without giving up development.

The speaker said the State Council will operate in terms of greater frequency and impact between sessions of Parliament, because many laws require more expeditious ways of reviewing, approving and implementing.

Diaz-Canel emphasized that we propose in 2020 to further consolidate economy, and to strengthen lines of work and prioritized programs such as house building, food production, transport, renewable energy sources, among others.

He called for saving and to reduce spending, and emphasized the importance of political-ideological preparation of cadres, the prominence of young people, and the participation of the people.

The President of the Republic, Miguel Diaz-Canel, reaffirmed to the Deputies that, as he did more than a year ago in the constitutive assembly of the Ninth Legislature of Parliament, we do not come to promise, we come to fulfill the mandate of the revolutionary people.

The speaker evoked Fidel and Raul, with a long, intense and courageous history in defense of the Revolution, and remarked that when he thinks of them, he thinks about the future, because they were a generation of future, raising a new nation from the Sierra.

If anything never lost the leadership of the Revolution was the moral course of history, Diaz-Canel expressed and added: There they are, undefeated, with no more monuments than his own work, to which we have a duty to pay the fairest of tributes: make it grow and thrive, without fear of threats or risks.

The poor on earth cannot lose our dignity or give in to threat, he confirmed in Parliament.

What Kind of People We Have!

We strongly reaffirm that the Cuban Revolution will keep intact all its convictions, those that cost the blood of the best children of our homeland, Miguel Diaz-Canel ratified in the extraordinary session of Parliament that elected him as President of the Republic.

Today we make ours those assessments so often listened to Army General Raul Castro, of “what kind of people we have,” Diaz Canel said, stating that with that lineage one does not hesitate to face the future, aware that we will conquer it.

Those who believe and build have defeated those who hate and destroy; the more they assault and intimidate us, the more will grows, the national force, unity, the Cuban President remarked.

Like the mambises, we will not hesitate to use machetes if rifles are missing, and we will always have shame as a banner, and as a vest, morality, Miguel Diaz-Canel said.

Full Confidence in the Future

President Miguel Diaz-Canel said that our people, more than once capital of world solidarity, which gives to those who need it most, soon await in Havana of the 500 years a solidarity and anti-imperialist wave, as a cannon fire against the blow of the Imperial beast.

He evoked so many patriots who have marked Cuba’s long history in its struggles for independence, sovereignty and social justice, from the 19th century to the present day.

In the land of Raul and Fidel, Diaz-Canel emphasized, the warning of the Bronze Titan that whoever tries to seize Cuba will collect dust from his blood-watered land if he does not perish in the struggle, has not changed a millimeter.

Intense and challenging days await us, but no one is going to take away the confidence in the future that we owe our children, in the Fatherland the parents win for us standing, the Cuban President highlighted.

In assuming as President of the National Assembly and the Council of State, Esteban Lazo reminded those who 151 years ago united their lives to the destiny of the new nation for its freedom, until an independent and sovereign Homeland achieved with the revolutionary triumph.

Lazo ratified the willingness to comply with and enforce the Constitution and laws, with the patriotic commitment and personal selflessness of those who in more than a century and a half fought without ever giving up.

The President of the National Assembly recalled the teachings of Commander-in-Chief Fidel Castro, his victories in defense of the work built leading his people, together with Army General Raul Castro.

Lazo reiterated that in the face of the upsurge in Washington’s blockade and aggressive escalation, preparation for defense and implementation of plans for economic and social development are the fundamental tasks.

Members of the State Council

In the board of the National Assembly and the Council of State, Members Ana Maria Mari Machado, as Vice-President, and Homero Acosta as Secretary accompany Esteban Lazo.

This body complies with the principles of continuity of the Revolution and shows adequate representation of women, young people, blacks and whites.