Social media networks at the center of International Forum in Cuba

Social media networks at the center of International Forum in Cuba 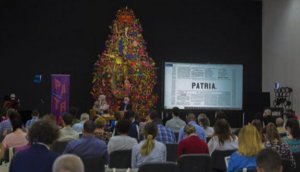 Havana, Cuba.- Social media networks and the battle for truth will be the focus of the debate at the Patria International Conference, which concludes Tuesday in Cuba, with influencers from Argentina, Brazil, Chile, Mexico, Venezuela, Spain, Lebanon, and the United States.

The event takes up the legacy of the National Hero, José Martí, 130 years after the founding of the newspaper Patria (Homeland), the official organ of the Cuban Revolutionary Party led by the independence hero. More than 100 invited communicators recognize his historical imprint.

They have a lot of strength and make us transcend in time. I see Martí with us, said Wafy Ibrahim, advisor for Latin America of the Arab channel Al Mayadeen during the first day of the conference sponsored by Casa de las Americas, the magazine Resumen Latinoamericano and the Union of Journalists of Cuba.

The event, which is broadcasted through the main online platforms of these institutions, allows the analysis of the machinery of manipulation of opinions and conscience implemented by the hegemonic media and social networks.

Etiquetas: Social media networks at the center of International Forum in Cuba