Cuba vindicated in Salvador in the face of US threats

Cuba vindicated in Salvador in the face of US threats 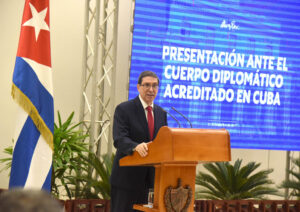 San Salvador, El Salvador.- The recent vindication of Cuba in the face of destabilizing acts promoted from the United States was highlighted here on Thursday by the Salvadoran website “Voces”.

This website highlighted the statement by Cuban Foreign Minister Bruno Rodriguez, who reaffirmed Cuba’s willingness to defend its sovereignty and internal peace in the face of campaigns promoted from abroad.

Voces published Rodriguez’s denunciation of the illegal nature of a demonstration convened for November 15 by people he described as agents, recruited, financed and organized by the US government.

Furthermore, it quoted the diplomat’s condemnation of Washington’s interference by sponsoring a destabilizing event the very same day of the resumption of the onsite school year and the reopening of Cuba’s borders.

During his speech, the foreign minister also denounced subversive actions on Facebook to bring about instability and prompt a social outburst.

Rodriguez called on the international community to condemn this new aggressive scheme against Cuba, which he described as a serious, unacceptable act that violates international law.

Etiquetas: Cuba vindicated in Salvador in the face of US threats