Cuba recalls the return of the Cuban Five 4 years ago

Cuba recalls on this December 17th the completion of the return of the five anti-terrorist fighters unjustly imprisoned in U.S. prisons. 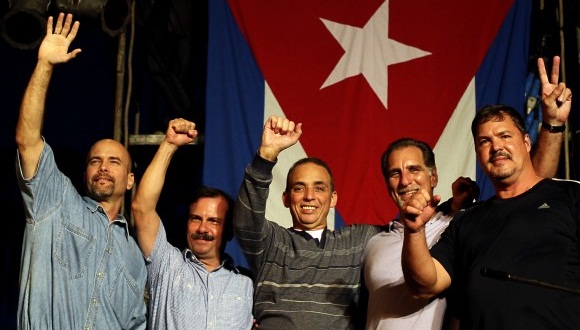 Cuba recalls on this December 17th the completion of the return of the five anti-terrorist fighters unjustly imprisoned in U.S. prisons.

Cuban leader Fidel Castro had predicted their arrival in a memorable speech at a rally held on June 23, 2001, in the municipality of Cotorro, Havana.  Fidel’s phrase “They will return!” materialized after more than a decade of a huge international solidarity campaign demanding the release of the Cuban Five.

Fernando and René González were released earlier after serving their complete sentences, while the release of Gerardo Hernández, Ramón Labañino and Antonio Guerrero occurred on December 17, 2004 thanks to a humanitarian agreement reached between the governments of Washington and Havana.  The world heard the news though the simultaneous announcements made by Cuban President Raúl Castro and U.S. President Barack Obama, in statements in which they also announced that both countries were working toward the reestablishment of diplomatic relations.

During their years of imprisonment in the United States, serving unjust and excessive sentences resulting from rigged trials, the Cuban Five suffered numerous violations of their human rights.  The injustice that surrounded their case provoked outrage and a great tide of international support that led to a massive campaign to demand the return.

Four years after their return, the Cuban Five continue to fight for their country, working in sectors that promote the development of the nation or in areas necessary to promote the disclosure of the reality of the island in the face of strong campaigns against its revolutionary process.