It Is Essential to Maintain All Measures to Curb Pandemic

When a new week of battle begins to COVID-19 in Cuba begins, whose first day brought encouraging news with 20 confirmed cases and 24 medical discharges in the same day, the government continues the daily analysis of the situation in the national territory, which continues on the favorable curve and therefore demands not to lower its guard for a second. 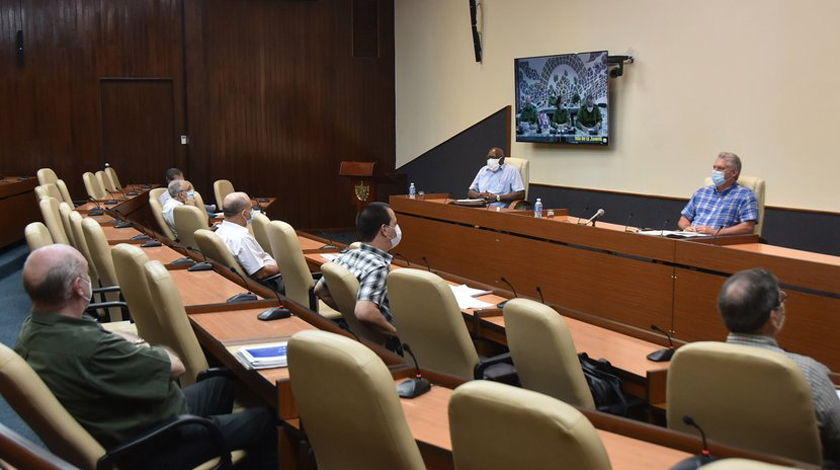 The temporary working group assesses the situation of the pandemic in Cuba. Photo/Estudios Revolucion.

HAVANA, Cuba.- When a new week of battle begins to COVID-19 in Cuba begins, whose first day brought encouraging news with 20 confirmed cases and 24 medical discharges in the same day, the government continues the daily analysis of the situation in the national territory, which continues on the favorable curve and therefore demands not to lower its guard for a second.

With this premise, the President of the Republic, Miguel Diaz-Canel Bermudez and Prime Minister Manuel Marrero Cruz, again led this Monday afternoon, from the Palace of the Revolution, the meeting of the temporary working group for the prevention and control of the new coronavirus, a disease counting in the world more than 2 million 84 thousand cases; of them, a thousand 389 in Cuba.

In updating the national context, Minister of Public Health Jose Angel Portal Miranda, detailed that 9 thousand 229 people are admitted for care and surveillance. Of these, 2,573 are patients in hospitals and 973 in centers for lower-risk suspects. Meanwhile, another 5 thousand 509, qualified as contacts, remain in places for isolation.

An essential factor in Cuba’s confrontation with the pandemic lies in the community research, which has been described as active because its essence lies in going out looking for cases and not waiting for them to arrive at hospitals.

Thus, according to the Minister, on the last day the number of researched reached 4 million 094 thousand 566 people, of which a million 396 thousand 588 were older adults, the most vulnerable in this fight.

The meeting also discussed on self-research through cell phones, a tool of great value and whose numbers have been falling, from more than 8 thousand self-weighing in its start-up, to about 3 thousand. In this regard, Deputy Prime Minister Roberto Morales Ojeda considered that “this platform is not being used as we originally proposed”.

To self-research on, Morales Ojeda explained, there’s no need for symptoms. “One of its benefits is that, although you report no symptoms, if at some point you start reporting them, it allows us to identify what the start date is,” which is essential for further medical treatment.

In his presentation to the country’s top leadership, the Minister of Public Health confirmed that 39 COVID-19 transmission events are open in 12 provinces and the Isle of Youth, a figure that has remained stable in recent days. Dr. Portal pointed out that before the end of April, four of them should close: that of Camilo Cienfuegos community, in Consolacion del Sur; La Ruda community, in San Jose de las Lajas; Naranjal, in Matanzas; and Turiguano, in Moron.

As it is usually the case in these daily meetings, several territories rendered an account for their work. On this occasion they were again the highest authorities of the Defense Councils of Havana, Villa Clara and Island of Youth Special Municipality, who reported on their epidemiological situation: the capital with the highest number of cases in the country with 577, followed by Villa Clara e with 189; and then the Island of Youth with 39 cases, but the highest incidence rate per 100 thousand inhabitants.

In each of these exchanges, through videoconference, the top leadership of the country urged to maintain all measures taken to contain the pandemic and not demobilize, even if the numbers are becoming more flattering in the island.

Taken of the Presidency of Cuba web site