A few days after the National Assembly of People’s Power elected the Prime Minister, deputy prime ministers and the new government team, it was held the last meeting of the Council of Ministers in 2019, chaired by Miguel Diaz-Canel Bermudez, President of the Republic of Cuba, and directed by Prime Minister Manuel Marrero Cruz. 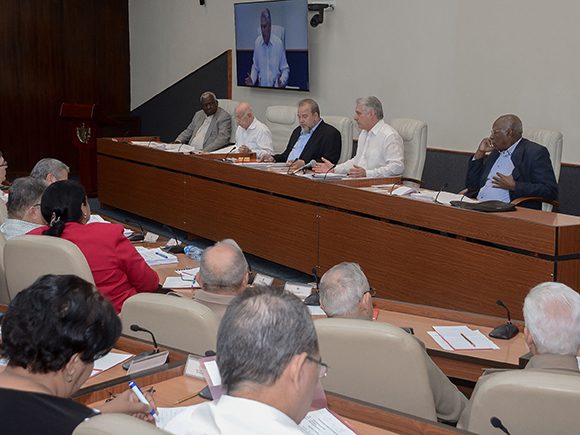 HAVANA, Cuba.- A few days after the National Assembly of People’s Power elected the Prime Minister, deputy prime ministers and the new government team, it was held the last meeting of the Council of Ministers in 2019, chaired by Miguel Diaz-Canel Bermudez, President of the Republic of Cuba, and directed by Prime Minister Manuel Marrero Cruz.

The broad work agenda developed during the day included momentous issues of economic and social life that impact on national reality and from which strategic lines for the government’s performance in 2020 are also defined.

In this regard, when making the conclusions of the meeting, President Diaz-Canel listed four key priorities: ideological battle, in the face of the current colonizing platform they want to impose on us and the US government’s attempts to discredit the Revolution; defending the country; the intense legislative exercise initiated to support the Constitution of the Republic; and the economic battle.

Referring to the latter, Diaz-Canel appreciated that 2020 has to be the year in which it is proposed whatever is necessary to be implemented to unleash the productive forces, which cannot be confused with privatization, because that is not our way. Therefore he insisted that a detailed analysis be taken of what is required to be unraveled from the state and what is private to make the Cuban economy more harmonious and streamlined.

The Cuban President highlighted that next year we will continue working to make room for all forms of management and ownership endorsed in the conceptualization of the Cuban economic and social model and also in the Magna Carta. “We’re going to remove obstacles to boost state-owned enterprise and make the real business resizing the country needs,” he said.

With particular emphasis the head of State referred to the need to maintain in daily practice savings measures as a government’s disposition, and which must be complied with at all levels; “working with savings measures is also knowing how to deal with problems differently,” he insisted.

The President of the Republic set out clear work strategies, and he also highlighted the challenges facing the Standing Committee on Implementation and Development and the agencies of the Central Administration of the State to continue compliance with the Party and Revolution’s Economic and Social Policy Guidelines; as well as the continued attention to the demographic problem, the impact of which extends to several scenarios of society and economy.

After a broad assessment of the current scenario in the country, Diaz-Canel commented exhaustively on the priorities already defined for the management of the Cuban Government in the next calendar in the most diverse areas. Among them he highlighted the struggle for efficiency; improving the Government’s work in all its instances; the quality of criminal proceedings; updating and modernizing the financial banking system; and the empowerment of foreign investment.

Similarly, the Cuban President emphasized that relentless work should continue to ensure the quality of services in tourism; break non-payment chains in domestic trade; achieving greater productions of food and medicines; replacing imports; progressing in the computerization of society and compliance with the National Housing Policy in its second year of implementation; stimulating electricity generation from non-consumer diesel sources; as well as to continue the confrontation with corruption and illegalities.

To work to start next year at the good pace that the country needs was the call made by the President of the Republic to the Council of Ministers on Tuesday. “You have to create conditions to start well on January, finishing homes, exporting, contributing to economy,” he highlighted.

“As a result,” he said, “next year we will systematize the rigorous and in-depth analysis of economic performance.”