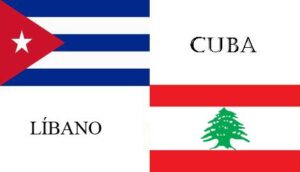 Beirut, Lebanon.- The Jose Marti Latin American Arab Solidarity Association in Lebanon has reiterated on Tuesday the support and brotherhood towards the Cuban people amid the consternation caused by a big fire that is affecting the Matanzas Supertanker Base.

Along with friends of Cuba on this side of the world, the leadership of the Association evoked the internationalist nature of the Cuban Revolution and its capacity to turn difficult moments into opportunities to get up and continue the path of struggle towards victory, always.

In a letter, it sent condolences to the family members and close friends of the victims of the fire and wished a speedy recovery to the injured.

Yahya Ghaddar, Secretary General of the Global Group to Support the Choice of Resistance, also conveyed his condolences for the catastrophe and wished the best, and peace for Cuba, its people and the Revolution.

Specialized forces from Cuba, Mexico and Venezuela are pouring thousands of tons of water by air and land on the Matanzas Supertanker Base, which has been burning for more than 72 hours as a result of a lightning strike.