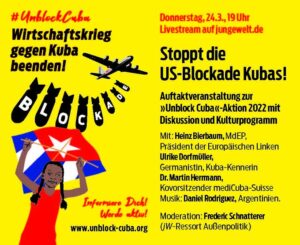 Berlin, Germany.- Several German groups reaffirmed their support for Cuba this week, and announced the beginning of a new campaign to condemn the actions by the United States against the Caribbean nation, a diplomatic source informed on Wednesday.

A communiqué from the Cuban Embassy in Germany noted on Tuesday that the 2022 UnBlockCuba campaign will be launched at the headquarters of the German newspaper Junge Welt on March 24 to denounce the US commercial, economic and financial blockade against Cuba.

The Assembly of Members of the Network of Solidarity with Cuba in Germany, held last Saturday in Berlin, is among the most significant and recent actions in support of the Cuban people.

Participants in the event, representing various groups, also referred to the prospects for the future work of the Germanic Cuba solidarity movement, the source added.