Groups in Laos express solidarity with Cuba in relation to disaster

Groups in Laos express solidarity with Cuba in relation to disaster 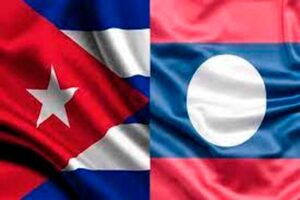 Vientiane, Laos.- The Laos-Cuba Friendship Association and a group of Laotian graduate students sent a message of solidarity with Cuba and especially with the people of Matanzas.

The signatories described the incident as a material and human catastrophe caused by the dangerous and immense fire unleashed at the Matanzas supertanker base.

“We are confident that Cuba will move forward and gradually recover under the prompt attention and determination of its top leader, the country’s authorities and the provincial command post,” the message says, as posted on social networks by the Cuban ambassador, Enna Viant.

The incident at the supertanker base in the province of Matanzas began on Friday night, when lightning struck one of the crude deposits. The fire later spread to a second tank.

Over a hundred injured were reported as a result of the fires; according to the most recent report, 85 of them were discharged and 36 remain hospitalized, three of them in serious condition, five in critical condition and 28 in intermediate care.

Etiquetas: Groups in Laos express solidarity with Cuba in relation to disaster