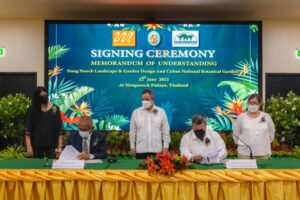 Bangkok, Thailand.- Cuba and Thailand strengthened ties for research, sustainable use and conservation of species through a memorandum of understanding signed here by representatives of botanical gardens from both countries.

The document, signed by President of the Nong Nooch Tropical Botanical Garden, Kampon Tansacha, and Director General of the Botanical Garden of Cuba, Carlos Perez Cuevas, lays the grounds for scientific cooperation.

It also lays the grounds for the development of recreational activities, the study of species, environmental protection and the promotion of tourism for the benefit of both peoples, Perez Cuevas stressed after signing of the memorandum before Cuban Ambassador to Thailand, Hector Conde.

For his part, Kampon Tansacha highlighted the importance of planned educational and training actions which he called a dream come true.

He also recalled technical cooperation activities between both institutions and his visit to Cuba in 1998, which he described as an unforgettable experience.

After the signing, the Cuban delegation planted the Cuban species Copernicia gigas and Pachira cubensis in the international area of the Nong Nooch Botanical Garden, which exhibits other endemic species of Cuba such as the palm tree Copernicia fallaensis, the Guaiacum sanctum (Guayacan) and the national flower Hedychium coronarium.

Meanwhile, the National Botanical Garden of Cuba has orchids of Thai species in its collection.