Raul Castro congratulates the Eastern Army on its 60th anniversary

Raul Castro congratulates the Eastern Army on its 60th anniversary 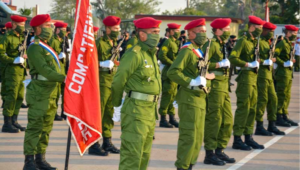 Havana, Cuba.- Army General Raul Castro Ruz congratulated the Eastern Army on the occasion of its 60th anniversary this April 21, two days after Cuba’s victory over the mercenary invasion of Playa Giron.

In a letter, the main founder of that command in 1961 acknowledged the efforts of the Revolutionary Armed Forces (FAR) and the Ministry of the Interior (MININT) in defense of the Homeland, expressed his infinite gratitude to the Cubans who accompanied him since the beginning of this process, and honored the fallen in the line of duty.

Raul’s letter was released at the central commemorative ceremony for the birth of the Eastern Army, which took place on Wednesday in a unit of the military region of Holguin province.

Major General and head of the Eastern Army, Agustín Peña Porres, highlighted in the ceremony the work carried out by that command and its principles to preserve the initial essence of its units in defense of Cuba, the contributions to dignity from different internationalist missions, the economic-social development and the confrontation to the COVID-19.