Chancellor of Cuba in Conversation with Timor-Leste and Myanmar Officials

The Minister of Foreign Affairs of Cuba, Bruno Rodriguez Parrilla, held this Friday separate meetings with Timor-Leste’s Chancellor, Dionysus Borba, and with the Special Envoy of the Myanmar Government, Kyaw Tint Swe. 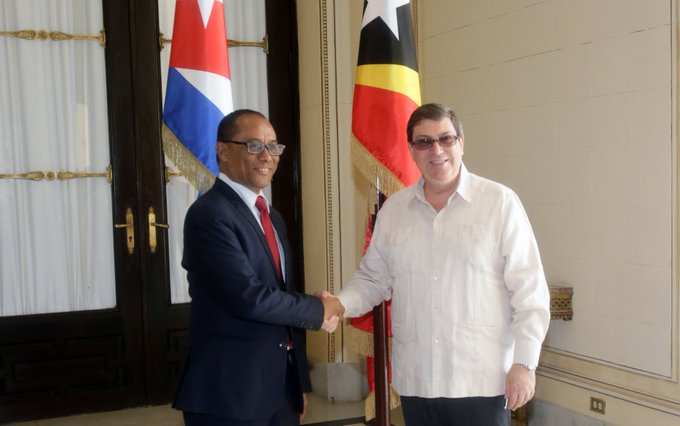 The Timorese Chancellor, who ends his 5-day visit to Cuba on Saturday, thanked the Cuban medical collaboration, and expressed his country’s willingness to maintain that link in the health sector.

For his part, Rodriguez Parrilla, after thanking Timor-Leste for Timor-Leste’s rejection of the blockade, highlighted the forthcoming fulfilment of a commitment made by Fidel in 2013 to graduate a thousand Timorese doctors from Cuba.

Cuba has been in collaboration with Timor-Leste since 2004, and a 152-employee medical brigade is providing care to the people in that country, which occupies the eastern half of the island of Timor in Southeast Asia.

Chancellor Bruno Rodriguez Parrilla also met with the Myanmar government’s special envoy, Kyaw Tint Swe, a meeting in which they expressed an interest in developing bilateral cooperation in sectors such as health and biotechnology.

During the meeting at the Cuban chancellery, both senior officials also discussed the possibilities of expanding economic and trade ties between Cuba and Myanmar, former Burma.

They also agreed that the forthcoming opening of a Burmese diplomatic mission in Havana will increase political dialogue and have a positive impact on the strengthening of bilateral relations, according to h the website of the Cuban Ministry of Foreign Affairs.

The Cuban Chancellor thanked Myanmar for its traditional support in the fight against the blockade imposed on Cuba by the United States.