Cuban President Miguel Diaz-Canel Bermudez held a meeting with the state mission and Cuban students in China, where he highlighted the importance of their work for bilateral links. 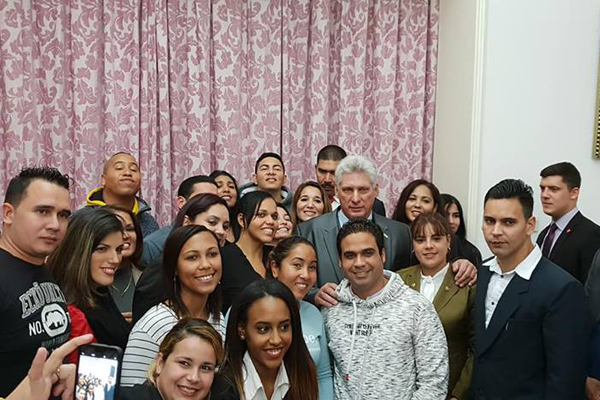 BEIJING, China.- Cuban President Miguel Diaz-Canel Bermudez held a meeting with the state mission and Cuban students in China, where he highlighted the importance of their work for bilateral links.

The President was interested in the conditions of life and attention given to the scholars, who explained their different university specialties and thanked the support of the Revolution to study in the Asian nation.

Diaz-Canel recalled that these scholarships are the result of Cuba-China cooperation and are relevant because they broaden the opportunities for human resources training and, consequently, will ensure a better prepared staff to materialize the national plans of development.

He also learned of the work undertaken by the Cuban diplomatic mission, of companies like BioCubaFarma and the existing to further consolidate the position of the island in that market.

The Lao Ministry of Foreign Affairs confirmed that the President of the Councils of State and Ministers of Cuba, Miguel Diaz-Canel Bermudez, will pay an official visit to the country next November 10 and 11.

The Chancellery indicated that the Cuban President will travel to the Indo-China Nation, in response to an invitation from President Bounnhang Vorachit.

Diaz-Canel performs a tour that included a brief stop in France and then official visits to Russia, Democratic Korea and China, where it is on Wednesday. Later he will travel to Vietnam, and on Saturday to Lao People’s Democratic Republic.

In these years, Cuba gave several hundred university scholarships to young Laotians, who returned to their country as physicians, jurists, engineers, architects, veterinarians and Spanish translators, among other specialties.