Newsweek: There are still no high-level contacts between Cuba and the U.S.

Newsweek: There are still no high-level contacts between Cuba and the U.S. 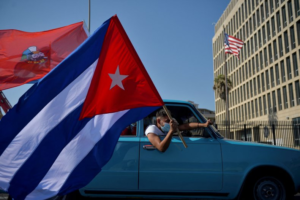 Washington, United States.- Although U.S. President Joe Biden has previously acknowledged the harm inflicted upon everyday Cubans by Washington’s failed policies against the island, a change of bilateral relations remains on the fringes of his priorities.

This is what the U.S. publication Newsweek points out in its article ‘Amid silence, Cuba urges Biden to end cruel blockade that he too sought to change’.

According to Newsweek, during his time as vice-president of the country, Biden spoke in support of Barack Obama’s efforts to relax travel and trade restrictions on the Caribbean island.

But while the White House is now pushing for a review in this area, so far there have been no high-level contacts between the two countries.

This was explained to Newsweek by Carlos Fernandez de Cossio, director of the Cuban Foreign Ministry’s General Division for the United States.

“The Biden administration publicly stated that it is carrying a policy review, but we do not know the true pace and scope of this process,” he said.

In addition, in his presidential campaign, he promised to reverse Donald Trump’s strategy. He said he would try to reverse the policies against the Caribbean island promoted by the Republican president.

During the last four years, more than 240 coercive measures were adopted against Cuba, of which 55 were implemented in the context of the Covid-19 pandemic, the Cuban diplomat explained.

“This prevents or complicates the acquisition of supplies needed to face the health crisis, with the clear intention of aggravating the Cuban economic and social scenario,” he stressed.

He argued that such measures damage bilateral relations, hinder the economic development of the Caribbean country, and their effects inevitably affect the daily lives of the Cuban people in all spheres.”

“It is difficult to suppose that the common citizen of the United States agrees or is in line with his or her government punishing the entire population of a neighboring country for more than 60 years with the purpose of causing economic instability, hardship, lack of supplies and the suffering of the entire population,” he said.

To maintain that policy, Fernandez de Cossio argued, “the United States government has resorted to deception, distortion of the truth, concealing information, and trusting in its ability to ensure that the majority of the people of the United States ignore what happens in Cuba.”

He also rejected the inclusion of Cuba in Washington’s unilateral list of alleged countries sponsoring terrorism, one of the latest actions promoted by Trump.

Cuba is not a sponsor of international terrorism, nor does it represent a threat to the United States, he stressed.

Etiquetas: Newsweek: There are still no high-level contacts between Cuba and the U.S.