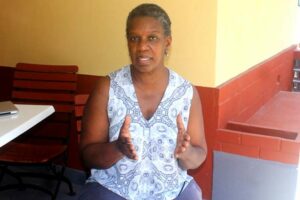 In an interview with Prensa Latina, Walker criticized the recent pronouncements of the US Government regarding Cuba’s in counter-terrorism efforts, which is incredible, considering the type of policies that Washington supports around the world.

In turn, she regretted that after more than four months after the arrival of Democrat Joseph Biden to the White House, the 243 coercive measures imposed on Cuba by his Republican predecessor, Donald Trump (2017-2021) still remain in force.

‘It is painful and frustrating, but it does not come as a surprise because in the United States, policy towards Cuba in many aspects is directed by an influential sector of the most conservative Cuban-Americans in Miami,’ said Walker, co-president of the National Solidarity Network with Cuba.
She recalled that Biden made hopeful statements during his electoral campaign and after four years with Trump ‘we expected a different attitude towards Cuba, a different policy towards Cuba.’

For Walker, students from the Latin-American School of Medicine are receiving the training that only Cuba can provide and they are taking what they have learned back to the communities, especially the poor and lacking health services.

She confessed that Cuba is in her heart because it represents ‘many beautiful things.’ ‘It may not be perfect, but it takes pride of place when we think about health, education, caring for the elderly or children, the environment, agriculture, sustainability, and when you don’t see the number of people living in the streets like it happens in New York, where I live.’