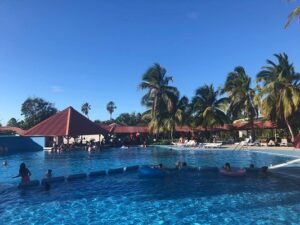 Camagüey, Cuba.- France is currently among Camagüey’s major tourist-sending markets, and 36 holidaymakers from that European nation recently arrived here at the beginning of the peak tourist season.

Camagüey, which reopened its borders to foreign visitors on November 16, when its International Airport resumed operations, has the infrastructure ready, especially Santa Lucia beach, and the hotels on Cayo Cruz, north of the region.

Several French tourists talked about the high level of efficiency of the “health protocols that provide protection and safety to those who arrive in Cuba, a country where life is gradually returning to normal.”

The region stands out for its natural wealth, particularly the Santa Lucia resort with more than 20 kilometers of beaches, in addition to the exploitation of Cayo Cruz, where the largest hotel project in the country is underway.

France, along with Italy, Russia and Canada, are among the Camagüey’s tourist-sending markets, a region that has also reported an increase in domestic tourism.