Díaz-Canel reflects about two peoples on the same frequency

Havana, Cuba.- The flight from Moscow to Ankara was a stretch that allowed Cuban President Miguel Diaz-Canel Bermudez to share with journalists accompanying him on the international tour these days ideas about what happened in the recently concluded official visit to the Russian Federation. Taking advantage of the break in the air trip between Moscow […] 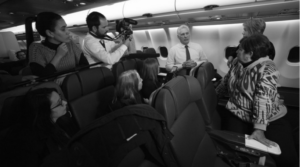 Havana, Cuba.- The flight from Moscow to Ankara was a stretch that allowed Cuban President Miguel Diaz-Canel Bermudez to share with journalists accompanying him on the international tour these days ideas about what happened in the recently concluded official visit to the Russian Federation.

Taking advantage of the break in the air trip between Moscow and Ankara, the Cuban president answered some questions asked by reporters, which aimed, above all, to seek an assessment of the recently concluded visit to the Russian Federation, and also to evaluate exchanges such as the one held with President Vladimir Putin.

Regarding that meeting, which undoubtedly has a very special connotation, the Caribbean leader said that it was “a conversation between friends, and between presidents of countries that are today under pressure, under sanctions”. They are countries -he said about the Island and Russia- that must move in the midst of many complexities, and that are related by history.

The dialogue between the two leaders, according to Díaz-Canel, came with a strong emotional, sentimental charge, since it was of great importance to unveil a monument dedicated to Commander in Chief Fidel Castro Ruz in a place in Moscow. It was “a gesture of friends of Cuba, of people of the people, of very humble people” who had Putin’s support: “it was a project that was in the making, and precisely because of the possibility of its realization, he (the Russian counterpart) invited us to be in Russia on this occasion”. According to Díaz-Canel Bermúdez, there is “a tremendous level of agreement between the two countries on the problems affecting the world”.

The president highlighted the high level of relations that has always existed between the island and the Eurasian country. He referred to a dialogue that has never been interrupted and made reference to projects such as the reactivation of the steel mill activity -something that is underway and which includes the participation of Russian specialists.

He also mentioned a diagnostic and service center for Kamaz technology in Cuba; and added to the list the generous scholarship programs for the improvement of numerous young Cubans; oil prospecting; cultural exchange; the issue of electricity generation, or the iron and steel industry, or the willingness to improve the financial and transportation banking infrastructure. In them, and in others, it is expressed day by day how two countries are united by a two-day road: that of the deepest friendship, that which is earthly, and which also has much to do with the spiritual dimension of bilateral relations.

Fidel -a friend whose will is still gravitating on the will of both peoples-; Raul as another architect of the friendship that never ceases motivated several reflections of the president: “I think, he said, that one of the things we have to recognize is that in the midst of our difficulties, and in the midst of the adversities that friends also face, we have always found a sensitivity, on their (Russian friends) part, to attend in a differentiated way to Cuba’s problems”. And that happens precisely at a time, as Díaz-Canel reasoned, when humanity is experiencing one of its most tense and complex moments.

In one of his reflections, he commented that there is a will for international projection in pursuit of multilateralism, a position that links Russia and Cuba. I believe that there is also a sense of responsibility: “What can we contribute: they, from a great nation; we, from a small nation but with the example we give of resisting creatively”, in spite of the enemy that is so close to us and that “has wanted to strangle us”.

Etiquetas: Díaz-Canel reflects about two peoples on the same frequency