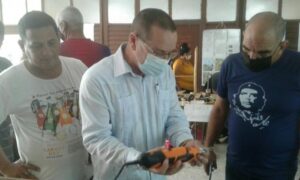 Havana, Cuba.- The design by Cuban doctors of a craniotome, used in intracranial interventions in pediatric ages, today contributes to alleviate the damage caused to healthcare services in Cuba by the United States blockade.

The development of the tool, whose purpose is to facilitate access to the cranial cavity and reach the brain without risk to the patient, was possible thanks to the use of a small, high-speed electric motor, to which a complement was added that allows drilling into the bone, one of its managers told Granma daily.

According to Dr. Angel Camacho, a neurosurgeon at the Jose Luis Miranda Pediatric Hospital of the central province of Villa Clara, this instrument, which has facilitated surgeries in more than 400 children in the central region of Cuba, is the most widely used in pediatric neurosurgery, since 90 percent of interventions are intracranial.

Moreover, the source reported the creation of an extension to the same equipment allows to operate children under one year of age who suffer from very frequent diseases such as craniosynostosis, a birth defect in which the skull bones close prematurely.

Camacho assured that, to date, minors in the central region, from Matanzas to Ciego de Ávila, have benefited from this innovation.

Health services in Cuba are one of the most affected by the blockade that the United States has maintained against the island for more than 60 years.