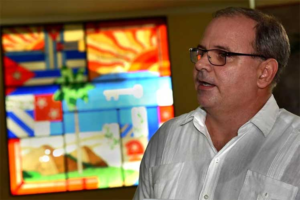 Havana,Cuba.- The director-general for Latin America of the Cuban Foreign Ministry, Eugenio Martínez, rejected Saturday attempts to hold Havana responsible for the situation in Colombia.

On Twitter, the diplomat specified that sectors of the Colombian ultra-right and some individuals of Cuban origin residing in the United States use the Caribbean nation as a pretext to hide the true causes of the protests.

‘The purposes of these slanderous accusations are to divert attention from the repression and police brutality that have already caused dozens of deaths, among them those of young Colombians such as Alison Méndez, Lucas Villa, and Sebastián Múnera,’ he stated on the social media network.

He emphasized that Cuba does not intervene in Colombia’s internal affairs and has demonstrated its commitment to peace in the South American country.

He added that these false statements against the Caribbean island also seek to justify the intensification of the economic, commercial, and financial blockade imposed by the United States, which increasingly generates greater rejection in the international community and within the North American nation itself.

Johana Tablada, deputy director for the United States at the Cuban Foreign Ministry, also said on Twitter that U.S. Senator Marco Rubio, Colombian politician Alvaro Uribe, and others who falsely accuse Cuba are associated with the dirtiest campaigns of disinformation and threats to peace.

Last May 7, the Ministry of Foreign Affairs of the island described as unjustified and unfriendly the expulsion of the first secretary of its embassy in Colombia, Omar Rafael Garcia, declared persona non grata by Bogota due to alleged ‘activities incompatible with the provisions of the Vienna Convention’.

At the time, the Cuban Foreign Ministry stated that the unjustified action was intended to divert the international community’s attention and the Colombian society from the violent repression of the military and police forces against the demonstrators, which caused dozens of deaths and hundreds of wounded.

Etiquetas: Cuba rejects attempts to hold it responsible for the situation in Colombia