Don’t Be Complacent to COVID-19

“The measures and unity of all in Cuba is a real sign of the strength distinguishing us, and allows us to speak, although without being complacent, of a favorable behavior of COVID-19 in the country,” Minister of Public Health Jose Angel Portal said. 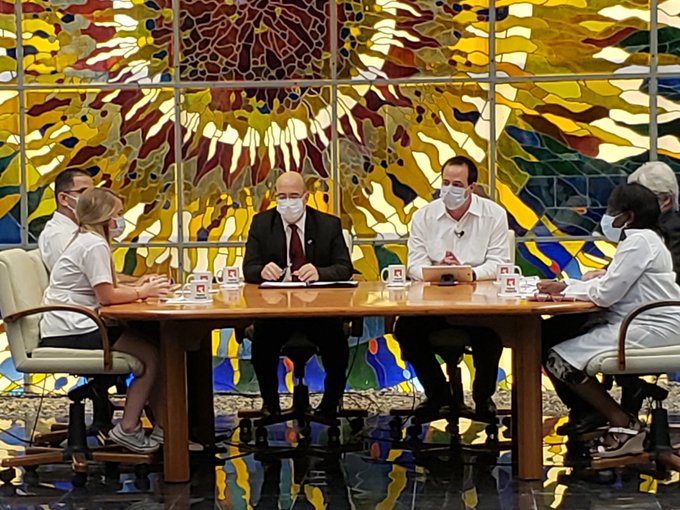 HAVANA, Cuba.- “The measures and unity of all in Cuba is a real sign of the strength distinguishing us, and allows us to speak, although without being complacent, of a favorable behavior of COVID-19 in the country,” Minister of Public Health Jose Angel Portal said.

Speaking at the Roundtable TV program, Dr. Portal updated on the epidemiological situation of the island, and reported that between PCR tests and rapid kits 19.3 percent per thousand Cubans have been studied, and samples continue and increase in population segments.

The country has not dismantled any of the measures and is engaged in disease control, the Minister confirmed, and noted that 87.9 per cent of confirmed cases are already recovered.

The Public Health Minister stated that patients diagnosed today with the new coronavirus are concentrated in the provinces of Havana and Matanzas.

The Minister of Public Health, Jose Angel Portal, pointed out in the Roundtable TV program that Havana currently shows the largest number of patients diagnosed as active with COVID-19, and has contributed almost 50 percent of the total cases accumulated on the island.

The expert highlighted the efforts of the World and Pan American Health Organizations, and remarked the case of Cuba, with 28 Henry Reeve Brigades in 24 countries, in addition to the presence of the Cuban medical collaboration in 54 nations since before the pandemic.

Dr. Portal reiterated the priority the State Budget attaches to the health sector, which sets Cuba apart from other places, where health systems have collapsed.

The official also referred to the complex global situation, particularly in the Americas region, which became the epicenter of the pandemic, with the United States and Brazil at the forefront.

The Conscious Effort of All Is Indispensable

To continue working because the scenario of Cuba before COVID-19 is the most favorable, and that the country can avoid re-outbreaks or have as little as possible, the Minister of Public Health, Jose Angel Portal, called at another time of his intervention at the Roundtable TV program.

The expert confirmed the message that nothing can lead to overconfidence at all, for this is a battle that requires everyone’s conscious effort.

Dr. Portal stated that seven territories in the country have not reported positive cases of the disease in the last 15 days, the number of asymptomatic is growing, and only seven local transmission events remain active, out of the 44 the nation had.

The Minister of Public Health emphasized that a group of measures would need to be maintained in later stages, and hygiene, responsibility, and social estrangement would be required wherever possible.

Cuba Remains in a Favorable Scenario

The Dean of the Faculty of Mathematics and Computing of the University of Havana, Raul Guinovart, explained at the Roundtable TV program how forecasts on COVID-19 in Cuba currently behave.

On the possible scenarios that could occur in Cuba in the face of the disease, Guinovart said the country remains at the most favorable, and stated that the curve managed to flatten, reflecting the discipline of the people and the positive measures applied in the country to stop the progress of the virus.

The scholar indicated that the Cuban health system had been strengthened in the fight against the new coronavirus, with novel research and methods and treatments to deal with epidemics and future diseases.

However, Dr. Guinovart reiterated at the Roundtable, the pandemic remains present in Cuba, and the measures taken to curb the virus should not be neglected.

COVID-19 to Be Endemic in Cuba

The Dean of the Faculty of Mathematics and Computing of the University of Havana, Raul Guinovart, said that the post-COVID-19 situation in Cuba has already been raised, using mathematical models that simulate the different possible scenarios.

Dr. Guinovart considered that a critical scenario with large re-openings would not occur in the country, thanks to the measures applied and the experience gained. However, he warned, there will also be no ideal context, without a recurrence of cases.

In this regard, the expert explained that COVID-19 will become endemic in Cuba, that is, it will remain stationary for a while and it is predicted that small regrowths can be controlled when they happen.

The scientist stated that the virus had not diminished its transmission capacity in the country, so it would depend on the social discipline that forecasts remained favorable.

Technological availability to Deal with the Virus

The National Director of Electromedicine, Zholem Jorge Isaac, reported at the Roundtable TV program on the missions of the sector in the fight against COVID-19 in Cuba.

The engineer stated that the mission of that area to the disease is to maintain the functioning of the equipment of the National Health System, a task requiring high quality standards and a daily challenge, due to the obstacles associated with the U.S. blockade against Cuba.

Jorge Isaac explained that solutions were sought for the repair of much-needed equipment such as therapy fans, and from the joint work there is today a technological availability of more than 98 percent.

The National Director of Electromedicine also alluded to import substitution by producing equipment such as bacteriological filters, and highlighted the importance of repair work in the so-called Red Zone.

Family Doctors on the Front Line

A family doctor for 31 years, Dr. Leticia Leonor Goslin, from Heroes del Moncada Polyclinic, in Plaza de la Revolucion municipality, explained how health personnel prepared on the topics related to COVID-19, and the means of protection they should begin to use.

Dr. Goslin said at the Roundtable TV program that it was a staggered training, which also included how to conduct a better epidemiological survey, and health audiences with the support of mass organizations.

The physician commented on the experience with Medical Sciences students in active research, and the identification of the vulnerable population.

Dr. Goslin emphasized that, coupled with the intense work linked to the new coronavirus, Family’s Doctors and Nurses did not paralyze other prioritized programs such as the maternal-child one.

An Unforgettable Experience in the Midst of the Pandemic

“It is comforting that the population appreciates our work,” Lucia Ferrer, a medical student said in describing the experience of active research that many young people have developed during these months of fighting COVID-19 in Cuba.

The student referred in the Roundtable TV program to the human values and quality of the training process of Cuban universities, important elements in this fundamental task in the battle to overcome the disease.

Ferrer stated that from the first year, medical students have had direct contact with patients and are linked to health centers. They also know prevention is one of the main objectives of the Cuban health system.

The medical student stated at the Roundtable that these precepts have helped almost 50,000 students carry out active research.