At the meeting of the temporary group for the prevention and control of COVID-19, Cuban President Miguel Diaz-Canel referred to the country’s priorities in combating the disease, including clarifying details in the approach to local transmission events to cut off the spread. 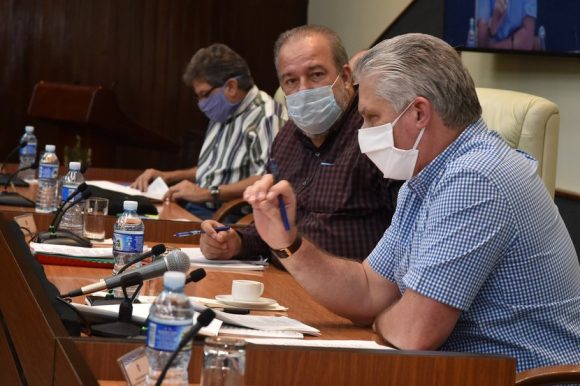 HAVANA, Cuba.- At the meeting of the temporary group for the prevention and control of COVID-19, Cuban President Miguel Diaz-Canel referred to the country’s priorities in combating the disease, including clarifying details in the approach to local transmission events to cut off the spread.

Diaz-Canel lamented the death on Sunday of two people, highlighted the 30 medical discharges, and called for continuing to insist on the review of nursing homes as well as the operation of hospitals.

The Cuban President said that, in addition to having forces prepared to deal with the disease, it is also necessary to ensure the protection of staff and the organization of hospital services.

Diaz-Canel called for reviewing protocols, the rigor they are used with, and to review a group of services that should be offered to doctors and staff who are working.

The Minister of Public Health updated the situation of COVID-19, and he remarked the importance of the Virtual Research, in which 19 thousand 922 people have been self-researched.

The Minister reported that in the self-research people from Havana, Guantanamo, Villa Clara, Matanzas and Sancti Spíritus score out, of which 12.4% declared to have symptomatology; 46 were admitted to isolation centers, 60 between suspects and lower-risk centers, and three in hospital.

Authorities of Villa Clara province explained the attention to the event generated at the Nursing Home in Santa Clara, in which there were 57 contagions between senior citizens and workers.

Governor Alberto Lopez explained that security measures were intensified in other similar institutions, as well as in psychiatric hospitals and psycho-pedagogical centers.

Through videoconferencing, Havana authorities reported on control to local transmission events and the care and conditioning of hospitals.

They explained that work is being carried out to improve the supply of drinking water with the enablement of Maulin Dam, the maintenance of the Cuenca Sur supply source, and the launch next week of two desalination plants, which will alleviate the situation in La Habana del Este.

At the meeting of the prevention and control group of the new coronavirus, they ensured that work is done in the capital to protect electricity networks affected by the increased demand.

The President of the Central Bank of Cuba, Marta Sabina Wilson, commented on the actions taken to provide a better service, protect staff and avoid unnecessary crowds in bank branches.