US maneuvers to tighten blockade against Cuba exposed in Laos

US maneuvers to tighten blockade against Cuba exposed in Laos 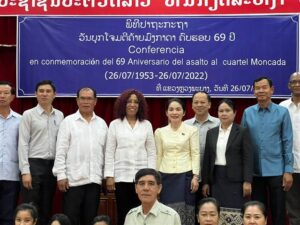 Vientiane, Laos.- The aggressive maneuvers that the US Government currently continues to carry out to tighten the economic, commercial and financial blockade against Cuba were denounced by the island’s Ambassador to Laos Enna Esther Viant.

The United States is trying, by all means, to destroy a genuine and democratic revolutionary process such as that in Cuba, the diplomat stressed during a lecture given at Souphanouvong University in Luang Prabang province, on the occasion of the 69th anniversary of the attack on the Moncada garrison.

Viant assessed the historic transcendence of that military action, which took place on July 26, 1953 and was led by then young revolutionary Fidel Castro, and offered a detailed explanation on the current situation in Cuba and the progress in the development plans, despite the tightened siege.

She also expressed gratitude to the authorities of the Lao People’s Revolutionary Party, the provincial Government and the Lao Friendship Association for the support offered to her country, and recalled a quote by President Miguel Diaz-Canel when he said, “defending Cuba is defending a project of dignity.”

As part of the program of the visit to Luang Prabang province, the ambassador was received by Governor Khamkham Chanthavisouk.

Etiquetas: US maneuvers to tighten blockade against Cuba exposed in Laos