Havana, Cuba.- Cuban President Miguel Diaz-Canel received the chief of the International Boxing Association (IBA), Umar Kremlev, the weekly Jit reported on Wednesday. The website of the Cuban Sports Institute (Inder) noted that the parties agreed on major steps for the development of boxing in Cuba and discussed boosting collaboration in the development of boxers […] 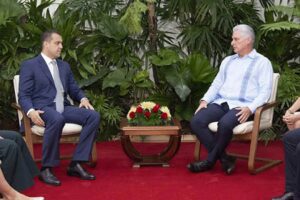 Kremlev suggested that an International Boxing Day be held in Cuba in 2023, and Diaz-Canel gave his full support and instructed the government to start implementing the project.

The IBA chief also proposed the construction of a large boxing institute in Cuba, which will create opportunities for the education of trainers and officials, as well as the best conditions and special programs for the preparation of boxers.

The Cuban head of State assured the government’s support for this project, through which new technologies will be implemented in the institute.

Among the ideas analyzed by the two parties was holding the Diamond event of the World Boxing Tour in Cuba, the brand-new boxing series promoted by the IBA.