Havana, Cuba.- Cuban President Miguel Díaz-Canel on Thursday expressed his condolences for the death of Major General (r) Antonio Enrique Lussón Batlle, an outstanding figure of the Cuban Revolution. On his Twitter account, the president wrote: “We deeply regret the death of Major General Antonio Enrique Lussón Batlle, a man with an impressive record of […] 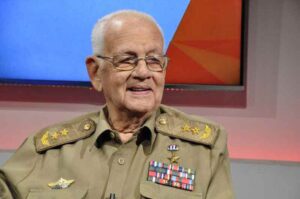 On his Twitter account, the president wrote: “We deeply regret the death of Major General Antonio Enrique Lussón Batlle, a man with an impressive record of service devoted to the Revolution, a Hero of Cuba. Our deepest condolences to his family and friends.”

Lussón Batlle, who died in Havana on Wednesday, played important military and civilian responsibilities during his long career, since his incorporation into the Rebel Army in 1957, led by Commander-in-Chief Fidel Castro, to the fight against the dictatorship of Fulgencio Batista (1952-1958).

He founded the Communist Party of Cuba, in which he was a member of its first Central Committee, was a delegate to its congresses, and also served as a legislator to the National People’s Power Assembly (Parliament) in several legislatures.

Lussón was awarded various decorations, and at his death, he held the honorary title Hero of the Republic of Cuba.

His body will be cremated, and his ashes will be displayed at the Veterans’ Pantheon in Havana’s Colon Cemetery to be transferred later to the Mausoleum of the 2nd Eastern Front in Santiago de Cuba.