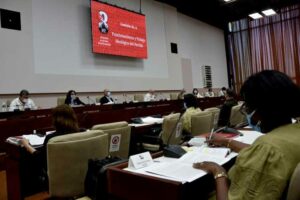 Havana city, Cuba.- The second day of the 8th Congress of the Cuban Communist Party (PCC) takes place here today, with the work of commissions on issues such as the country’s economic future and the prospects for development.

The 300 delegates participating in the party meeting are looking into issues presented the day before by the party’s First Secretary, Raul Castro, in his Main Report.

According to the foreseen agenda, commissions should finish their debates by late afternoon, and their recommendations will be prepared to be submitted to the consideration of all delegates in the plenary session of the conclave.

Among the issues to be analyzed are proposals for changes in the Guidelines of the Economic and Social Policy of the Party and the Revolution approved in 2016, the functioning of the political organization and ideological work, as well as the training and preparation of future leaders.

The most important political meeting on the island, which will last until April 19, coincides with the 60th anniversary of the proclamation of the socialist character of the Cuban revolutionary process and the defeat of the mercenary invasion of Bay of Pigs, armed and financed by the United States.