Cuba thwarts another human smuggling operation from the US

Cuba thwarts another human smuggling operation from the US 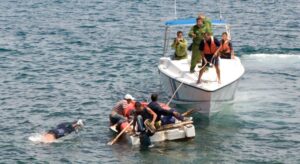 Afterwards, in the area of Playa el Pino, in the same municipality, the troops arrested eight citizens (six men and two women) linked to the operation, who were taken to the National Revolutionary Police station in Bahía Honda.

Meanwhile, the crew members and the speedboat were taken to Puerto del Mariel captaincy, with the purpose of carrying out the corresponding legal proceedings, according to the report.

With this operation the TGF intercepted since the beginning of last year 20 speedboats involved in this type of human trafficking actions carried out by criminal organizations abroad, and arrested more than 30 human smugglers, including 33 Cubans who live abroad, four Mexicans and one US citizen.

Just in 25 days, Granma newspaper pointed out, three speedboats with seven traffickers were captured, and since mid 2021 there has been an increase in the number of human smuggling operations organized from the US.

Illegal departures from Cuba since 2021 had as one of their caracteristic features more complex operations organized in the US, as well as repeated shipwrecks that cause psychological trauma and leave lifelong consequences, the newspaper recalled.

Etiquetas: Cuba thwarts another human smuggling operation from the US