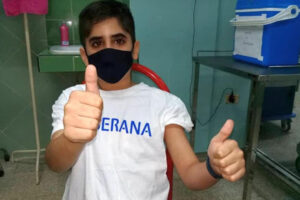 Havana city, Cuba.- Gabriel García made the news again today, after becoming the first volunteer in Soberana Pediatrics trial in Cuba to have received the last dose with vaccine candidate Soberana Plus and conclude the vaccination plan.

‘Today the first Cuban child vaccinated with Soberana02 gets his last dose. Soberana Pediatrics receives the first group of 12 to 18 years of age who received their first dose on June 14, Finlay Institute of Vaccines (FVI) published on its Twitter account with a photo of García.

This 12-year-old Cuban boy was the first to get Soberana 02 immunogen, developed by FVI, along with 24 other volunteers between 12 and 18 years of age as part of second stage of the study, which established two doses of the drug and a third with Soberana Plus.

Official sources confirmed that the heterologue scheme administered in the pediatric analysis recently showed 91.2 percent efficacy against symptomatic disease (considered the main variable in the phase III study of Soberana 02).

Likewise, a temporary partial study revealed 75.7 percent efficacy on the infection and 100 percent to prevent serious or severe cases and equal numbers on deaths.

In recent days, the administration of the second dose to age group of three to 11 years of Phase I of the clinical trial was completed, after safety of the first injection in adolescents was verified, with a medical follow-up 24, 48, 72 hours and a week after immunization.

Based on these results, a report was made to receive approval from the Center for State Control of Medicines, Equipment and Medical Devices, a regulatory authority, on the inclusion of the rest of the child population and the sample with adolescents was expanded to 150.