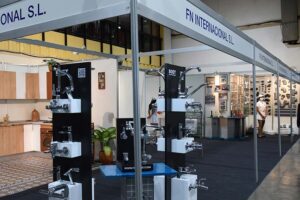 Havana, Cuba.- The FECONS 2022 International Construction Fair is coming to its end on Friday at the Pabexpo fairgrounds after four days during which various foreign companies explored trade and investment possibilities in Cuba.

“This is an opportunity to reach regular customers and open the market with new importers in the midst of a wide construction potential,” said Carlos Martinez, representative of the Spanish company Kerasol 2000.

“Although the current fair is smaller than in previous editions, those of us who came to establish businesses do so with great enthusiasm and desire to give the push that Cuba and the world need after two years of the Covid-19 pandemic,” he said.

For his part, Jose Planas, representative for the Latin American division of the Spanish company DACAME, specialized in producing scaffolding and other products, pointed out that even though there are few investment possibilities, the Cuban Ministry of Construction was interested in the joint scaffolding production.

“The fair represents a return to commercial life after two years of absence: there are many companies that we did not see, others remain, but people continue to bet on this market despite the effort it requires,” he concluded.

FECONS 2022 was held this week in Havana, aimed contributing to the efficiency of the sector, boost foreign investment and promote trade relations between Cuban and foreign economic actors.

The Pabexpo fairgrounds opened its doors to 118 exhibitors from 15 countries, in an opportunity to increase the productivity of investment processes in a fundamental field for the development of the economy and society.