Love for Cuba and rejection of the US blockade, feelings of the world

Love for Cuba and rejection of the US blockade, feelings of the world 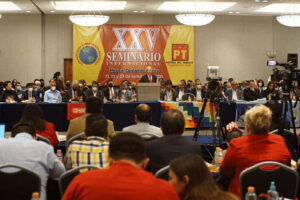 Mexico city, Cuba.- The deep sentiment of love for Cuba of the world left, and the overwhelming rejection of the aggressive policy of the United States, were evident in Mexico.

More than 130 leaders of left-wing parties and movements from 45 countries gathered at an International Seminar sponsored by the Labor Party (PT) of Mexico, dedicated a very important space to the issue of Cuba, which emerged in the three days directed by the national coordinator of that organization, Professor Alberto Anaya.

This is, according to experts, the largest international forum for political reflection and meeting of revolutionary and progressive thought in the world.

The results take shape for the practical exercise in the adoption of executive resolutions product of the debates and analysis, which derive in actions to be executed as if it were a congress and not a seminar, hence it has lasted in time and has already completed a quarter of a century.

Figures such as former presidents Evo Morales, from Bolivia, and Manuel Zelaya, from Honduras, or Rodrigo Londoño, from the Comunes party of Colombia, among many other leaders of that category, were present at the seminar, while others, such as the Paraguayan Fernando Lugo, participated virtually.

Although 15 resolutions were adopted with actions in favor of Palestine, Colombia, Western Sahara, Peru, Puerto Rico, Syria, El Salvador, Chile, Venezuela, Guatemala, Lebanon, the Basque Country, or issues such as migration or the neoliberal economic war, Cuba was the most acclaimed and debated.

Ángel Arzuaga, Deputy Head of the Department of International Relations of the Central Committee of the Communist Party of Cuba, introduced the subject with extensive information on current events in his country, with a detailed account of the advance of the Revolution in the political, social and economic fields. in the difficult conditions of blockade and pandemic of Covid-19.

The proposal of the president of Mexico, Andrés Manuel López Obrador, to grant the Cuban people the Prize for Dignity and proclaim it a World Heritage Site for its heroic resistance for 62 years to interference and the blockade of the United States, while this brave attitude made it the Numantia of our time, will be considered.

Manuel Zelaya, who declared the event closed, said that to correct the shame of the current world economic model, the first thing to do is lift the blockade against Cuba, a challenge that humanity, and especially the American continent, has to face with decision.

If the blockade persists, it is impossible to speak of a real change in the world, and not to do so is an ignominy.

The ex-guerrilla and leader of the Comunes party, Rodrigo Londoño, extolled Cuba’s pacifist vocation, very contrary to the aberration of placing it among the countries that promote terrorism when it is its main victim.

In this regard, he gave as an example that the Colombian peace agreement grossly violated by President Iván Duque was materialized in Havana under the political thought of Hugo Chávez and Fidel Castro.

The massive support for Cuba was accompanied by commitments to continue solidarity actions, participate in the world day against the blockade from November 15 to 17, and the dissemination of the book Defense and refounding of Cuban socialism, by the author Roberto Regalado.

Etiquetas: feelings of the world - Love for Cuba and rejection of the US blockade