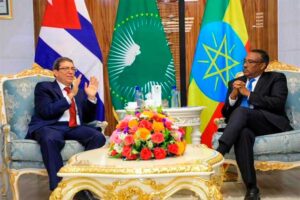 Addis Abeba, Ethiopia.- The Foreign Ministers of Ethiopia, Demeke Hasen, and Cuba, Bruno Rodríguez Parrilla, confirmed their willingness to strengthen bilateral ties during an interview held in the capital, it was learned.

I exchanged with the Deputy Prime Minister and Foreign Minister of Ethiopia, Demeke Hasen, and we confirmed our willingness to strengthen bilateral ties based on a historic relationship of friendship, solidarity and cooperation, the Cuban Foreign Minister revealed in a post on his Twitter account.

Rodríguez Parrilla is touring African countries, among them Equatorial Guinea and Uganda.

The day before, the Cuban Minister remarked the solidarity commitment of his country’s medical brigade in Ethiopia, during a meeting with members of that group.

Likewise, he commented that the affection and gratitude of the African people are the greatest recognition to the professionalism and daily dedication of the collaborators.

According to the ambassador of the African nation in the Caribbean island, Genet Teshome, Ethiopia and Cuba treasure long-standing relations and have great potential to diversify them.

Speaking to Prensa Latina, the diplomat pointed out that the ties between the two countries are historic and in 2023 they will celebrate the 50th anniversary of these ties, “so we are going to work to increase them,” he said.

The representative described as very good the cooperation in health, “in which doctors and other specialists have worked in hospitals in Ethiopia providing medical and academic assistance”.