CubaCoop expresses solidarity with Cuba in face of raging fire

CubaCoop expresses solidarity with Cuba in face of raging fire 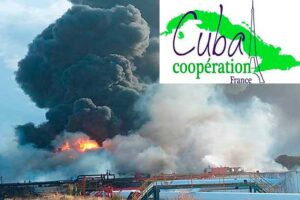 Paris, France.- The Cuba Cooperation France Association (CubaCoop) on Monday joined the world solidarity with the Cuban people and government in the face of the fierce fire that has been raging at the Supertanker Base in Matanzas since Friday.

We convey a message of friendship to the Cuban people, and particularly to all those affected, stressed the association founded in 1995 to promote economic and commercial ties between the two countries.

In a statement shared with Prensa Latina, CubaCoop regretted the human and material impact caused by the fire, which began on Friday when an electrical discharge hit one of the fuel tanks at the industrial zone of Matanzas.

According to official sources, the disaster has so far left one person dead, 125 injured and 16 are still missing, while firefighters are working ardously to prevent the contain the intense flames.

CubaCoop highlighted the response of several countries to the fire, among which it mentioned Mexico and Venezuela, which have already sent specialists and material resources, as well as Russia and Chile.

The association described the situation the Cuban people are going through at this moment as a tragedy, and recalled that the island is already suffering the harsh consequences of the US rough policy, in reference to the economic, commercial and financial blockade imposed by Washington on the Caribbean nation more than six decades ago.