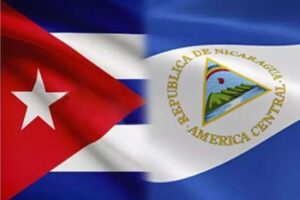 Havana, Cuba.- Army General Raul Castro and Cuban President Miguel Diaz-Canel on Tuesday congratulated Nicaragua on the occasion of the 43rd anniversary of the triumph of the Sandinista Popular Revolution of 1979.

“On such a significant day for the brotherly Nicaraguan people, we extend our warmest congratulations as the 43rd anniversary of the triumph of the Sandinista Revolution is celebrated,” the message reads.

The text ratifies the Caribbean nation’s will to continue strengthening the bonds of friendship and solidarity with the homeland of Augusto Cesar Sandino (1895-1934).

On July 19, 1979, the third and last armed Revolution in Latin America and the Caribbean triumphed in that Central American country, followed by that of Mexico in 1910 and Cuba in 1959.

With the victory of the Sandinista National Liberation Front, 45 years of destruction under the yoke of the Somoza military dictatorship came to an end.