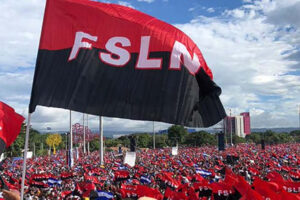 Havana, Cuba.- Cuban Foreign Minister Bruno Rodriguez today congratulated the people and government of Nicaragua on the 42nd anniversary of the Sandinista Revolution.

The foreign minister, through his Twitter account, also extended a fraternal embrace to President Daniel Ortega, as well as expressed the island’s solidarity with the Central American nation, in view of the complex international scenario in which it is developing.

Thousands of Nicaraguans received the date with a popular vigil and festivities that had their epicenter in Plaza de la Fe in the capital, while other cities and towns of the 15 departments and the two autonomous regions of the country also held celebrations.

The Nicaraguan revolution was, after the Cuban revolution, the only one that came to power by means of armed struggle, on July 19, 1979. Later, Sandinismo lost in the 1990 elections, but regained the government of the country in 2006 by the same means.

On this occasion, the celebration of the revolutionary victory coincides with the 60th anniversary of the creation of its leading political force, the Sandinista National Liberation Front (Frente Sandinista de Liberación Nacional).

Social networks show the stage of the Plaza de la Revolución, in Managua, set up for the main political celebration, at the end of Monday afternoon, a day off for state sector workers.