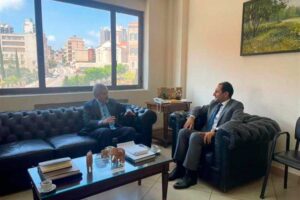 Beirut, Lebanon.- Cuba and Lebanon on Tuesday verified their mutual interest in continuing the development of the potentialities of both countries to strengthen and deepen the diplomatic and cooperation ties.

This was endorsed during the meeting between Jorge Leon, Head of the Cuban diplomatic mission in Beirut, and Ali Karanouh, head of the International Affairs department at the Lebanese Foreign Ministry’s Political Affairs Directorate.

During the exchange, both diplomats verified the willingness to strengthen the collaboration relations in different economic, commercial, cultural and scientific sectors, among others. Leon, who is also a Cuban Charge d’Affaires in Lebanon, handed over a message of gratitude for the traditional coordination and support for the Caribbean nation in international forums.

Leon took advantage of the friendly meeting to confirm the Lebanese solidarity with the Cuban people in the fight against the economic, commercial and financial blockade imposed by the United States for more than six decades.

Cuba and Lebanon have maintained relations since June 1960 and at present, the collaboration is focused on the commercial aspect with the sale of Cuban tobacco and in the financial aspect through the Lebanese bank Fransabank, which operates in the island since 1995.