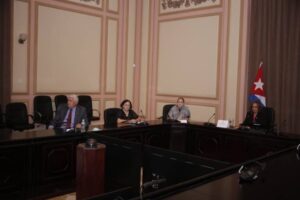 Havana, Cuba.- Cuba and China reiterated their interest in contributing to the strengthening of exchange and cooperation between the parliaments of both countries.

The intention was manifested in an online meeting held on Thursday between Ana Maria Mari Machado, vice president of the Cuban parliament, and her counterpart from the People’s Republic of China, Wang Chen.

Machado said that relations between the two nations are based on equality and mutual respect, a high level of dialogue, political trust, the coincidence of purposes, agreement and reciprocal support in international forums.

A press release from the Cuban parliament noted that during the talks, the Cuban deputy thanked China for its invariable position against the US blockade and reaffirmed Havana’s unequivocal position of support for the “one China” principle and condemnation of the interference in China’s internal affairs.

As for the strengthening of inter-parliament ties, the Cuban representative highlighted the visit to the People’s Republic of China of the National Assembly delegation in June 2017 and the successful videoconference held in May of last year with the President of the National People’s Congress, Li Zhanshu.

Machado said that China’s fight with the Covid-19 pandemic represents an example to follow, because it has managed to control the disease with great wisdom, high scientific level and adequate strategy, in addition to the fact that it has helped many countries with a high sense of solidarity.

Cuba was the first country in the Americas to recognize the government of the People’s Republic as the sole and legitimate representative of the Chinese people, as well as having modestly contributed to the beginning and advancement of China’s ties with Latin America and the Caribbean.

Etiquetas: Cuba and China reiterated their interest in contributing to the strengthening of exchange and cooperation