President Evo Morales said Bolivia faces the fight against drug trafficking with dignity and sovereignty, on the International Day against Drug Abuse and Illicit Trafficking. 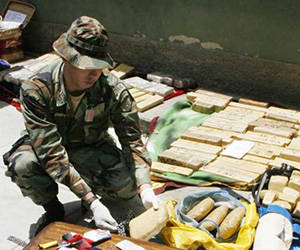 Official data record the existence of 23100 hectares of coca, a great decrease when compared with the 57890 hectares counted during the neoliberal governments.

With regard to drug trafficking, over 170,000 operations were carried out last year during which 300 tons of cocaine and 6000 of marijuana were seized.

In turn, the International Day against Drug Abuse and Illicit Trafficking is celebrated every June 26 to reinforce action and cooperation, in order to achieve a society free of that consumption, according to the United Nations Organization.