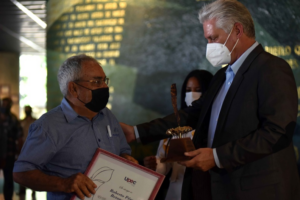 During the ceremony held at the Memorial that bears the name of the National Hero, Rogelio Polanco Fuentes, member of the Secretariat of the Central Committee of the Party and head of its Ideological Department, said that in the current context the ideas of the Apostle treasure an enlightened validity.

He pointed out that the country is testing for an information war.

He insisted on developing authentic technological sovereignty, a legal framework, and cooperation to preserve the right of nations in the face of imperial hegemony and the new digital distribution of the world.

He said that a new language and other ways of thinking and organizing political action are essential. As guerrillas of the digital era, in an asymmetrical scenario, we have to appropriate the instruments of the so-called fourth industrial revolution, he said.

Polanco Fuentes referred to the approval this year of a communication law in Cuba and the identification of innovative projects of editorial, economic and technological management in the media, which will allow stimulating and generalizing the best experiences.

In his words of gratitude for the highest award given by UPEC, Pérez Betancourt said that journalism is one of the most rewarding professions and highlighted José Martí as one of the references of honesty, ethics, and commitment to his revolutionary ideas.

He said that, at nearly 82 years of age, his formula for remaining active in the profession is based on not giving up in the face of misunderstandings or technological advances, learning from young and old, and making a sincere effort to transcend the local.

During the ceremony, professionals with an outstanding work during 2021 in Written Press, Radio, Television, Hypermedia, Photography and Graphics were also recognized with the Juan Gualberto Gómez National Journalism Award.

This March 14, Cuban Press Day is celebrated on the occasion of the founding of the newspaper Patria by the National Hero, a publication that today reached its 130th anniversary.