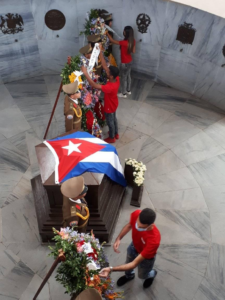 Santiago de Cuba, Cuba.- On the 126th anniversary of José Martí’s fall in combat, floral offerings were placed in the mausoleum that holds his remains in the Santa Ifigenia Heritage Cemetery on behalf of the Cuban people, Army General Raúl Castro and the leader of the Communist Party of Cuba and President Miguel Díaz Canel.

During the ceremony, high school students were in charge of arranging the ribbons.

In Dos Rios, in the municipality of Jaguaní, the national hero received the homage of a representation of the people of Granma province.

“For José Martí the first thought this May 19, 126 years after his fall in combat and his political testament, “President Miguel Diaz-Canel wrote on Twitter.

In his message on that social media platform, the Cuban leader also emphasized Martí’s ideology, fundamentally referred to timely prevent, “with Cuba’s independence,” the expansion of the empire over the lands of America.

An article in Wednesday’s edition of Granma newspaper stated that Martí put all his genius in the function of his ideals, and those who survived him did not hesitate to label him with the most grandiloquent titles, from the best known, Apostle, to other assertions such as that of Rubén Darío, who called him a true superman, great and virile.

The text points out that his death in combat on May 19, 1895, is still the great tragedy of Cuban history; Cubans let the man die, and the corpse of the man gave birth to the Apostle.