They Launch Book Raul Castro and Our America

The book Raul Castro and Our America. 86 speeches, interventions and statements, compiled by Abel Gonzalez Santamaria and published by Capitan San Luis Publisher House, was presented at the International Book Fair of Havana. 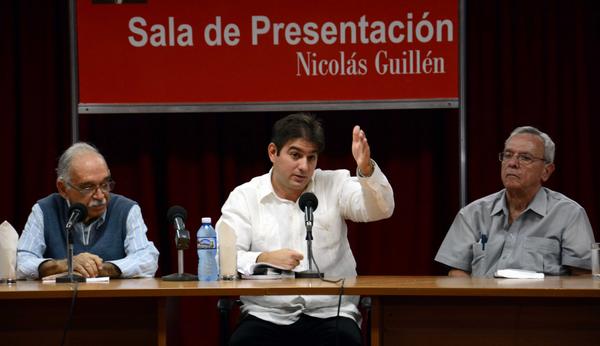 Abel Gonzalez Santamaria, compiler of Raul Castro and Our America.

HAVANA, Cuba. – The book Raul Castro and Our America. 86 speeches, interventions and statements, compiled by Abel Gonzalez Santamaria and published by Capitan San Luis Publisher House, was presented at the International Book Fair of Havana.

The Historian of Havana, Dr. Eusebio Leal, commended the sagacity of Gonzalez Santamaria to select the speeches and fragments that best show to the new generations the ideals of the President of the Councils of State and of Ministers.

Leal referred to the modesty, sensibility, intellectual capacity and attachment to the history of the Army General Raul Castro Ruz, and to the way he continues the Cuban social project based in Fidel’s concept on revolution.

In the space Meeting with…, at the Book Fair, Uruguayan writer and journalist Víctor Hugo Morales expressed his views about the damage the media war does to leftist governments.

The Raul Roa Higher Institute of International Relations launched a special issue of its International Politics magazine, dedicated to Fidel.

Gerardo Hernandez Nordelo, vice-rector of the institution, said the center pays tribute to the Commander-in-Chief, promoter of the magazine, in which prominent personalities address several facets of the leader of the Revolution in his work on foreign policy.

The Hermanos Saiz Association presented the 2018 Calendar Prizes, which Moises Mayan received in Poetry with the booklet The Discriminating Factor; and Claudia Damiani did in Narrative with The Odd.

In Children’s Literature the awards were to Cantabulas and Epopemas, by Junior Fernandez, in Theatre to Gladys Balloqui with A Drum for the Voyage, and in Science Fiction to Daniel Burguet with When You Wake Up.

The Book Fair of Havana hosted a panel on classical Chinese literature, and launched Diary of a Madman, The Daughter of the Dragon King and The Immortal Banished: Li Po, by Arte y Literatura Publisher House.

Enrique Sainz highlighted the values and beauty of the Chinese letters and pointed out that, although that culture is not known deeply in Latin America, it arouses great interest among the general public today.

The Editors and Translators Meeting presented the panel Do book writers eat? with Spaniard Pascual Serrano and Cuban Rogelio Riveron, who referred to the editorial processes in both countries and the inadequacy of copyright.