Cuba thanks Nicaragua for its support against U.S. blockade

Cuba thanks Nicaragua for its support against U.S. blockade 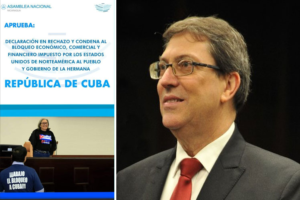 Havana, Cuba.- Cuba’s Foreign Minister Bruno Rodriguez t thanked the National Assembly of Nicaragua (parliament) and the government and people of that country for their solidarity and support against the U.S. blockade.

He conveyed the appreciation on Twitter. The head of Cuban diplomacy’s gesture responds to the declaration issued Thursday by the Legislative body of that Central American nation that demanding the end of the U.S. blockade.

In the text, the Nicaraguan parliament described the policy implemented by the United States for six decades as criminal, aggressive, terrorist, and disrespectful to international law, which is now intensifying to subvert the revolutionary process in the Caribbean nation.

It warned that Washington exercises a foreign policy of subjugation, blockade, impositions, pressures, and blackmail to many countries of the world, mainly to the weakest, which constitutes a violation of international law, human rights, and peoples’ self-determination.

In this sense, it demanded quick, firm, and forceful actions to lift the blockade in a definitive, complete, and unconditional manner.

The demand takes place a little less than a month before the vote in the United Nations General Assembly on the Cuban draft resolution Necessity of putting an end to the U.S. blockade against Cuba.

Etiquetas: Cuba thanks Nicaragua for its support against U.S. blockade