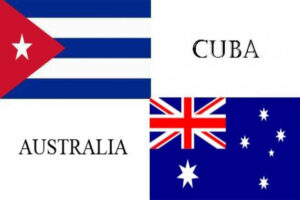 Canberra, Australia.- donation of medical supplies to Cuba left by air from the city of Brisbane and it will arrive in Havana in the next few days, the island’s Ambassador to Australia Ariel Lorenzo informed on Wednesday.

The donation, consisting of more than 26,000 syringes and needles, expendable material, multivitamins, nutritional supplements and other medical supplies, is part of the solidarity campaign in Australia towards our country, the diplomat told Prensa Latina.

This new gesture, Lorenzo stressed, has a special value because it takes place in a difficult context marked by the great difficulties caused by the Covid-19 pandemic and the tightening of the US blockade.

The organization and logistics of the operation has been assumed by the Australia-Cuba Business Council, an entity created in 2015 to foster economic ties and bilateral cooperation.

Companies, businessmen, the state branches of the Australia-Cuba Friendship Society, the foundation that has been working for years with the William Soler Pediatric Cardiocenter and many other friends in solidarity with the island, have contributed to the donation.