Prime Minister Calls for Complying with Sanitary Measures in Havana

Manuel Marrero, Prime Minister of the Republic of Cuba, attended the session of the Havana Defense Council on Friday, during which he exchanged on the need to intensify health measures. 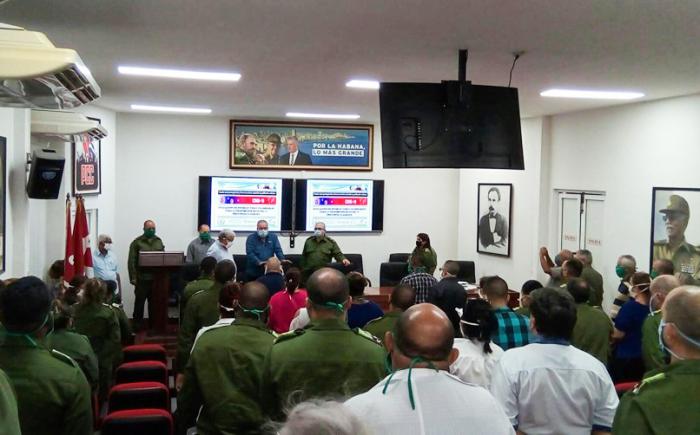 HAVANA, Cuba.- Manuel Marrero, Prime Minister of the Republic of Cuba, attended the session of the Havana Defense Council on Friday, during which he exchanged on the need to intensify health measures.

Marrero referred to the need to increase food production, at a time when the possibilities of acquiring them in international markets flare up again due to the economic blockade imposed on the country by the United States.

Luis Antonio Torres Iribar, President of the Provincial Defense Council, called for control measures in the most vulnerable areas to the transmission of Covid-19, and to increase research in areas with positive cases.

At the meeting it was known about the VA-MENGOC-BC vaccine, which, although not specifically against Covid-19, does strengthen the immune system.

A Greater Control in the Cuban Capital

During the meeting it was known that Centro Habana is the only municipality in the country with three zones in which more cases of Covid-19 are present. At Los Sitios People’s Council, there are 45 citadels with a high concentration of people. On the other hand, the blocks adjoin with arteries of great vehicle flow and geographically it is the municipality of highest population concentration in Havana.

In this regard, Torres Iribar oriented to comply with the measures to achieve the expected result in areas that are determined to be socially isolated and increasing the presence of the police to avoid transgressions and indiscipline, in cases where required. In addition, it is planned to increase research in this town of intense flow of people.

Dr. Raul Perez Gonzalez, director general of the National Institute of Hygiene, Epidemiology and Microbiology, emphasized the need to intensify research in Centro Habana municipality, as a measure that should help prevent contagion if we take into account the higher concentration of people by block.

“We must be precise, very clear and honest in assessing each situation,” Iríbar highlighted, and recognized the work of builders who have restored medical facilities. The official also set the example of the hospital opened on Thursday night at the University of Computer Sciences.