The President of the Councils of State and of Ministers, Army General Raul Castro, pointed out that despite the financial tensions the Gross Domestic Product grew 1.1 per cent in the first semester, which denotes a change in the sign of economy compared to last year. 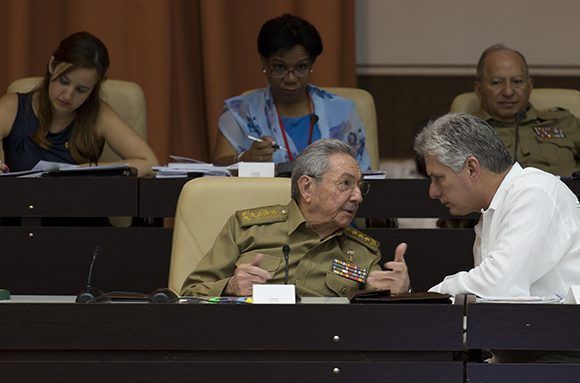 HAVANA, Cuba. – The President of the Councils of State and of Ministers, Army General Raul Castro, pointed out that despite the financial tensions the Gross Domestic Product grew 1.1 per cent in the first semester, which denotes a change in the sign of economy compared to last year.

In closing the ordinary session of the National Assembly of People´s Power, Raul emphasized that amidst the complex circumstance also nuanced by difficulties with fuel supply from Venezuela, economy shows a discreet encouraging result.

He indicated sectors such as agriculture, tourism and other exports of services had an effect on it, as well as constructions, sugar production, transport and communications.

Raul remarked that advances have been made in prioritized investment programs, which are the basis for the nation ´s development.

To Maximize Services to the People

The Cuban President noted that in the first half of the year the internal monetary balance improved, which is expressed in a lower growth of retail prices before a greater supply in markets.

The dignitary said the budget deficit has been lower than expected and added that not without great efforts the obligations resulting from the ordering of external debt to our main creditors has been fulfilled rigorously.

Raul noted that in spite of the many efforts, we have still not been able to catch up on current payments to suppliers, whom he thanked for their trust.

He added that the described situation forces to continue taking the required measures to the maximum protection of export earnings, food production and services to the population.

The Cuban President informed Parliament that today the figure of self-employed workers exceeds half a million, and there are more than 400 non-agricultural cooperatives, which confirms its validity as a source of employment and the diversification of goods and services´ supply.

However, Raul said, deviations from the policy in this area and violations of the legal regulations in force have been detected. To this regard, he mentioned the use of raw materials and equipment with illicit origin, income statements by evading tax obligations and inadequacies in state control at all levels.

He emphasized that in order to eradicate problems and ensure the development of that form of management within the framework of legality, the Council of Ministers adopted decisions that will be issued as the updated regulations are published.

About the change of policy toward Cuba announced by U.S. President Donald Trump, Raul said he resumed a speech from a confrontation past that has failed over 55 years.

History cannot be forgotten, as they have suggested us sometimes, the Army general said and pointed out that Trump has been misinformed about Cuba’s history and the relations with the United States, and about patriotism and dignity of Cubans”

The Cuban President made a tight historical outline of the bilateral ties, marked by Washington’s historic claim to seize Cuba and recalled that since January 1, 1959 the strategic goal of the American politics has been to overthrow the revolution.

Raul pointed out that no one can deny that in the attempt to isolate Cuba, the United States suffered a deep isolation.
Any strategy against Cuba will fail

Army General Raul Castro strongly rejected Donald Trump’s policy of intensifying the economic, financial, and commercial blockade of the Us against Cuba, under an old and hostile rhetoric.

He highlighted that President Trump’s decisions ignore the support of broad sectors of American society, including most of the Cuban emigration, to the lifting of the blockade and the normalization of bilateral relations.

Any strategy intending to destroy the revolution through coercion, pressures, or subtle methods will fail, Raul warned, and confirmed that Cuba have much to be proud regarding human rights and it do not need lessons from nobody.

Cuba and the United States can cooperate and coexist, respecting their differences, the President of the Councils of State and Ministers underlined, reaffirming his readiness to a respectful and unconditional dialogue.

Interference in Venezuela Must Cease

Since 2010, the United States has put into practice the concept of unconventional warfare to exploit the psychological, economic, military, and political vulnerabilities of an adversary country to alter or defeat its government, President Raul Castro said.

He denounced that Venezuela suffers from an unconventional war that did not begin now, imposed by imperialism and oligarchic sectors, which has provoked violence in the streets and fascist acts.

Foreign intervention against the Bolivarian and Chavista Revolution must cease; terrorist and coup violence must be condemned unequivocally; they should all join in the call to dialogue, Raul emphasized.

The Army General reiterated the solidarity with the Venezuelan people and their civic-military union headed by President Nicolas Maduro. Besides Raul expressed the support for Luiz Inacio Lula da Silva, a victim of political persecution in Brazil.

The Elections and July 26

We are sure that as this people have shown before, the upcoming elections will be an example of a true exercise of democracy, sustained by widespread popular participation, legality and transparency, Raul said to the Cuban Parliament.

He stressed the important political importance of this process, which he considered must be an act of revolutionary reaffirmation on the part of the Cuban people, which requires a hard work by organizations and institutions.

Raul referred to the next central act for the 64th anniversary of July 26 in Pinar del Río, where Vice-President Jose Ramon Machado Ventura will be the main speaker.

We will celebrate the Day of National Rebellion for the first time without Fidel’s physical presence. Let us resolve to face new challenges under the guidance of his example, revolutionary intransigence and permanent faith in victory, he said.